1 December 1135. Death of Henry I, the Great-Grandfather of Henry the Young King.

On 1 December 1135 Henry the Young King’s paternal great-grandfather and namesake, Henry I of  died after 35-year reign. The reign marked by legal and administrative changes that assured prosperity and peace in both  and  (the latter had been won by Henry from his elder brother Robert Curthose in 1106).

At the time of his death Henry was staying in  at a hunting lodge at Lyons-la-Forêt. As Henry of Huntigdon reports: “… he partook of some lampreys, of which he was fond, though they always disagreed with him; and though his physician recommended him to abstain, the king would not submit to his salutary advice… This repast bringing on ill humours, and violently exciting similar symptoms, caused a sudden and extreme disturbance, under which his aged frame sunk into a deathly torpor… “ (p.259-60) 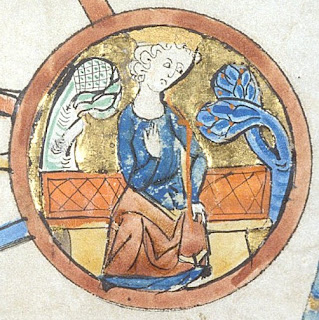 The old king was known for the “great delight in his grandchildren, born of his daughter by the Count of Anjou”* and they were  probably with him in those last moments of his life. Then the two-year old Henry [later Henry II] hardly remembered the event, but, already a grown man, he must have heard stories about his grandfather’s quickness of wit and decisiveness, his administrative and commander skills that had let him win first the kingdom of England, later the dukedom of Normandy, stories he probably passed to his own children, especially his eldest surviving son and heir, Henry the Young King. The latter, with his eyes wide opened and breath held, must have been listening to the stories about the decisive battles of his great-grandfather’s reign, Tinchebrai (1106) and Bremule (1119)** (to read the detailed account of the battle of Bremule click here), from both of which Henry I emerged victorious. In his ancestor’s incredible rise to power, Young Henry must have detected some similarities to his own story, for nothing had heralded such a splendid future for the fourth and youngest son of William I and Matilda of . He had seized opportunity when it occurred and taken over the crown immediately upon his elder brother, William II Rufus’s death in a hunting accident (1100)***

The Young King must have also heard about the turning point of his great-grandfather’s life and reign, the tragic loss of his only legitimate son and heir, William the Atheling in the White Ship disaster (1120) and the consequences of this untimely death. He clearly understood that the prince’s passing opened the way to succession to Henry I’s only surviving child, Empress Matilda and her lineage****, thus for young Henry himself. Was this what he was musing over when he accompanied his father at the consecration of Reading Abbey, Henry I’s great foundation, on 19 April 1164? Over twists of fortune- after all Young Henry’s elder brother William (1153-1156) had been buried at the feet of their great-grandfather there- over great deeds and challenges of kingship that his great ancestor had encountered throughout his long and eventful reign.

Henry of Huntingdon expresses the ambivalent feelings that the late king evoked in his contemporaries. Certainly Henry I’s great-grandson was among those who praised the old king for his “three brilliant gifts”. According to the chronicler these were:


Among the late king’s “gross vices” Huntingdon mentions avarice, cruelty and wantonness. But although, “like Salomon, he [Henry I] was perpetually enslaved by female seductions” (Huntigdon, p. 352) he truly did care for his illegitimate children and they were raised close to their half-brother, Henry’s only legitimate son, William the Atheling. William of Malmesbury, while describing the sinking of the White Ship gives as a glimpse into the family affections and solidarity. According to him, the young William could save himself, for he was already placed in the lifeboat, instead he chose to rescue his half-sister, Matilda of Perche, whose screams for help he heard. He turned back, thus sealing his own fate, for it was then when the other desperate passengers jumped into William’s boat and overload it. To follow suit, Robert of Gloucester was the chief supporter of his half-sister, Empress Matilda in her struggle against Stephen, the struggle that led Henry the Young King’s father, and respectively Henry himself to the crown of .

** In the battle only a few people died, as the twelfth century warrior was more concerned to capture- and thus profit from ransoms- than to kill. In his excellent Tournament Professor David Crouch draws attention to the comic accent that occurred in the course of the preliminary stage of the battle and was later described by Louis the Fat’s first biographer, Abbot Suger. Louis VI of offered to fight Henry I in person. In the twelfth century warfare the idea of a heroic single combat was a common one. Individuals were ready to take up the challenge and responsibility in order to avoid greater losses and settle the dispute even before the fighting in serious began. Louis was ready to take up such responsibility and proposed to fight between the two armies, but Henry refused. If he had agreed they were to fight “separated by a swift stream and a rickety plank bridge” (Tournament, p. 5), the thought that their armies found highly amusing, for both kings were rather stout men, and who knows what would have happened if they fought on the bridge.

*** Some scholars claim that Henry must have had a hand in his brother’s death. How else explain his actions taken immediately after the 2 August 1100? Henry was crowned king in Westminster Abbey by Maurice bishop of London (a ceremony he underwent for a second time after Anselm Archbishop of Canterbury returned from Lyon), just three days after his elder brother, William II Rufus had been killed while hunting in New Forest. This is how Henry explained his haste to Anselm:
‘… enemies were intending to rise up against me and the people who are mine to govern, and therefore my barons and my people did not want to delay it any longer’(form Anselm’s Letters in Judith A. Green, p.43-44)

**** In 1127, Henry I, after he had failed to sire a male heir by his second wife, Adeliza of Louvain, took an unprecedented step and made his barons swear allegiance to his only legitimate child, a daughter, Empress Matilda. After Henry’s death the barons broke the oath and preferred to choose Henry’s nephew, Stephen of Blois as their king. Stephen was crowned on 22 December Westminster Abbey, only twenty-one days after his uncle’s death.

William of Malmesbury’s Chronicle of the Kings of England. Translated by J. A. Giles. Internet Archive of Northeastern University Libraries.

The Chronicle of Henry of Huntigdon. Translated and edited by Thomas Forester. Internet Archive of Northeastern University Libraries.

Coronation. From the 8th to the 21st Century by Roy Strong. Harper Perennial, 2005.