Over His Dead Body

Henry the Young King died ‘in the flower of his youth’ on 11 June 1183, at . Henry’s chaplain, Gervase of Tilbury lamented his young king’s premature death, which ‘heralded the ruin of knighthood’. William Marshal, Henry’s tutor, guide and most faithful companion said that his young lord’s death ‘marked the end of all knightliness’. Both of them seem to be in the right, for the people who stood behind the events that followed the Young King’s untimely passing had nothing to do with what was to become known as chivalry. 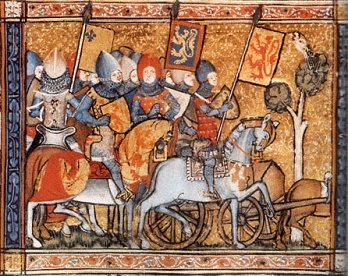 First of all, there was one Sancho de Savannac, ordinary mercenary, as it seemed. In reality old fox, cunning and ruthless, captain of the Basques hired by young Henry. It was him, who spoke in the name of his soldiers. The Young King had promised to pay them off, but he never had. It’s not their damned business that he died penniless. It’s not their damned business that he died. All they wanted was their money back. Sancho must have known that William Marshal had no means to pay off the late king’s debt, so he threatened to seize the royal body for ransom. Surely the old king would pay any price to get his beloved boy back. Both horror-stricken and shaking with fury, William Marshal had to employ all his authority and composure, before he offered himself as a guarantee to pay the money back. He gave his word and for Sancho that was enough to let him go and take his Young Lord to . William did not know how he was going to collect the required sum, and, later find the funds to fulfill his dying King’s wish. He had promised to take young Henry’s Crusader’s cloak to the Holy Sepulchre in .

The weather was fine, the day beautiful when the procession finally set off up the dusty road toward the north. But William did not see the clear azure sky. His horizon had become shrouded in the dark clouds the very hour his Young Lord had been ‘translated from shadows to light’ and for the time being he could find no means to disperse these clouds.

William Marshal was to live his long and eventful life without knowing how much he actually owed to Geoffrey, prior of Vigeois. He could not have known that he had been immortalized as the Young King’s carissimus on the pages of Geoffrey’s Chronicon. The prior himself must have been deeply moved by the events he had become eyewitness to. The Young King’s entourage stopped on its way north at Vigeois. The company was so “impoverished that a collection at a requiem … there raised but twelve pence (which the Young King’s chaplain filched)”. Henry’s household knights could not afford to provide candles about the bier and had to depend on the abbot’s hospitality. The same was with food. They could only count upon the prior’s charity. And the prior happened to be Geoffrey, a man with a flair for collecting stories in his memory and later pouring them onto parchment. Therefore, as he was giving dispositions to the monks to prepare meal and due lodgings for the unexpected guests, he seized the opportunity to find out what had happened and how the Young King had passed away. Next day, the very moment the sad procession left the walls of his monastery, the prior get down to work. And as it turned out, he made good use of everything he had learned. He described at length how young Henry ‘…pack as much repentance into his deathbed as he could’. He left nothing unsaid. The hair shirt, bed of ashes, halter around neck, Bernard, bishop of Agen administering the last rites, and many other men of religion … all was there to ‘draw the readers attention away from the affairs of this world to those of the next’. Of course, Geoffrey, a man of religion himself, must have seen young Henry’s untimely passing as divine punishment.

But there were other voices who disagreed with that of the prior. One Thomas de Agnellis, in his sermon claimed that as the Young King’s sad retinue was toiling over the jolly sunbathed hills and dales of , it became the focus for many miracles. The rumors of the late king’s sainthood began to circulate. The monasteries pillaged by him shortly before his death- as it happened some of the most sacred shrines of western suddenly forgotten, it was the impressive penance performed by Henry at his deathbed that really mattered now. Impressive penance and a leprous man, and a woman suffering from hemorrhages miraculously cured by touching the bier, the lights in the sky above the monastery of St-Savin on an overnight stop, and one more “display of celestial pyrotechnics” four miles before the city of Le Mans, where “ a light was seen in the sky in the shape of a cross, and a beam of light shone down upon the bier”. No wonder that when this latest revelation became common knowledge, the bishop and the great men of , acting in, what they probably saw as their common interest and utterly disregarding the dying king’s will- Henry had expressed a wish to be buried at cathedral- seized the opportunity to acquire the relics. That is why when the body  “… was set down in the choir of the of [they] rushed in, and with popular approval speedily buried it there”, next to the late king’s paternal grandfather, Geoffrey le Bel of .

When the citizens of learned of those ignoble doings they fought tooth-and-nail to get the royal body back. They threatened to raze the city of to the ground and, if necessary, carry off the body by force. They would grant its first royal burial. They would heighten the prestige of their city. They would not give anyone chance to dupe them. Especially not the people of . And they did as they said: ‘with success, but without dignity’ they granted its first royal burial, they heightened the prestige of their city, they did not give anyone chance to dupe them. They owed it mainly to the old king’s intervention who ‘fearing bloodshed between the rival cities, made an order for the corpse to be given up’. The poor body was disinterred, but as it turned out, despite the temporary stop at , it did not loose its efficiency. On its way north, at Sées, it cured two children, one suffering from dropsy, the other blind from birth and not able to move his arms and legs. The miracles highly similar, if not identical to those performed by Christ himself. On reaching the capital of , the Young King’s body went through careful examination. The people of wanted to make sure that the people of had not kept its parts as relics. They learned even more: the body, after its forty-day wandering in the sweltering heat of French summer, was incorrupt. One more effectual proof of young Henry’s sanctity.

The Aftermath
had its first royal burial on 22 July 1183, when the body of Henry the Young King, ‘wrapped in those linen clothes that had been used at his coronation, and upon which the sacred oil had flowed’, was interred peacefully near the high altar of their cathedral.

William Marshal was freed from some of his concerns, when Henry II paid off Henry the Young King’s debts, and Sancho and his soldiers got their money back. William could prepare himself to undertake his pilgrimage to the in his late Lord’s stead with one hundred Angevin pounds from Henry II’s purse and a safe place in the king’s household on his return.

Prior Geoffrey continued his work till he died, a year after the sad events he described in his Chronicon. He could not have predicted that in the future his account would become such an important source of information of the Young King’s last hours.

Walter Map, one of Henry II’s chroniclers, was right when he predicted that being king only in name, taking up arms against his own father, and dying without issue would doom the Young King to nothing but oblivion. And so it was: his name lost to posterity, his prowess on the tournament field, his charm and proverbial largesse, his strivings to get what he thought was rightfully his, all forgotten.

Those who did not forget

Still, there were those who did not forget. In 1184 Geoffrey Duke of Brittany, together with his wife, Constance founded a chaplaincy at the cathedral of Rouen ‘for the soul of his late brother, the young king Henry, with a rent of . per annum from his mills at Guingamp’. Troubadour Bertran de Born, who knew the Young King and urged him to support Richard’s unruly barons in the rebellion against their overlord, wrote a moving planh bewailing Henry’s unexpected and premature death. William Marshal founded a house of Augustinian canons at his estate of Cartmel, in memory of the two kings he had served: Henry II and Henry the Young King ‘my lord’. In 1194, eleven years after Young Henry’s passing, his cousin, Countess Eleanor of Beaumont-sur-Oise made a grant to the abbey de Notre-Dame d’Ourscamp for the souls of her late sister, Isabelle, Philip of Flanders’s wife, her present and past husbands, and ‘of the Young King Henry, my cousin’. Also Henry’s half-brother, Geoffrey, already the Archbishop of York, made a grant for his soul. Gervase of Tilbury, the Young Henry’s former chaplain immortalized him in his Otia Imperialia written for Henry’s nephew, Otto IV, Holy Roman Emperor. In 2009, Sharon Kay Penman, an American historical novelist, vividly brought Young Henry to life in the last part of her Angevin trilogy, Devil’s Brood, making him, with all his charms and whims, frailties and merits, a complete human being.

Roger of Wendover’s Flowers of History Vol. II translated into English by J. A. Giles

France, John. Mercenaries and Paid Men: the Mercenary Identity in the Middle Ages

“The Culture of Death in the Anglo-Norman World” by David Crouch in Anglo-Norman Political Culture and the 12th-century Renaissance ed. by C. Warren Hollister.

Everard, Judith. The Charters of Duchess Constance of Brittany and Her Family, 1171-1221

Crouch, David. The : The History of a Dynasty

Holbach, Maude In the Footsteps of Richard Coeur de Lion