What was Henry the Young King occupied in in the summer of 1174? When he was staying at Gravelines, waiting for the propitious winds to take him to to support the rebels and boost the morale, the news of the capture of William I of Scotland reached him. He changed his plans immediately, realizing that his cause on English soil had been doomed the very moment King William, one of his chief allies, had been captured before the walls of Alnwick.

Together with Philip, Count of Flanders, Henry joined his father-in-law, King Louis VII of France and on 22 July launched the first attack on the city of . He hoped to seize the Norman capital thus striking a serious blow at his father’s position. Fortunately for Henry II, he made very little progress. “A fair city set among murmuring streams and smiling meadows, abounding in fruit and fish and all manner of produce, … surrounded by hills and woods, strongly encircled by walls with ramparts and battlements …” turned out to be too well protected by the Seine, hills and walls to offer an easy prize. What’s worse, one of the bridges remained in the citizens’ hands, who put up a fierce resistance. 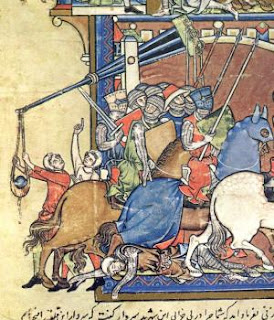 'Relying on the defences of the walls and using square stones, sharp stakes or long pieces of wood, they forced the enemy, who were attacking the outer walls in formation using siege engines, into headlong flight. But so that those who were under siege should have no respite, and so that they could put their own strength to the test with more energy and precision, the Flemings and the French alternated in the attack; as the French grew weary, the Flemings would stir themselves into action, using all the strength to undermine the walls. The remained unperturbed by the enemy’s threats or by any incursion, confidently expecting to win’.

The fruitless attacks went on for several days until 10 August, St Lawrence’s Day. It was then when, following the custom of the times, truce was proclaimed. The citizens seized the opportunity and ventured outside the city walls. On the bank of the opposite to the enemies’ camp they enjoyed all manner of sports, including a tournament. The sight proved to be too tempting for king Louis’s magnates and they urged their lord to break the truce and launch a surprise attack. Unwilling at first, the king finally yielded and gave order to assemble in strict silence. The preparations in the rebels’ camp however were noticed by the two clerks from one of the towers. Their immediate reaction and the sound of the bells saved the citizens. King Louis withdrew with yet another stain on his honour. He did not know that on 8 August, just a month after he left Normandy Henry II had landed at Berfleur,  Louis learned of  Henry II’ arrival on 11 August. The following day he learned that Henry’s Welsh troops cut off his wagon trains with supplies. And finally he learned that Henry was planning to attack from within the city. This final message made him have all of his siege-engines burnt to prevent them from falling into the enemy’s hands and ask for truce. The king of agreed, but under cover of darkness Louis withdraw with his army, not halting until he reached French soil. Later on he sued for peace and the negotiations were concluded at a conference held at Montlouis between and on 30 September 1174. Henry II, ‘who was an astute and vigorous man and capable with tremendous valour…’, triumphed due to fine generalship, skilled deputies and superior resources, which let him make use of Brabancon mercenaries on great scale. What’s more he was not vindictive in victory. His sons were forgiven and assigned revenues, ‘his liegemen and barons who withdrew from him and followed his sons [received] possessions of their lands which they held fifteen days before they withdrew from him’, and a general amnesty was offered, with four exceptions: the king of , the earl of , the earl of Leicester, and Roul de Fougeres. There was no mention of Queen Eleanor, her involvement in the rebellion and her release.

For Henry the Young King his Great Rebellion ended up in “house arrest” as well. At least this was how he must have seen it. He was to travel around with his lord father and learn the hard ways of kingship. And since his own views on what it meant to be king differed from those of his father’s, he could not have been more miserable than in the spring of 1175, when he bid farewell to the tournament circuits of northern France and crossed to England.

Barber, Richard. Henry Plantagenet
Warren, W.L. Henry II
The Plantagenet Chronicles ed. by Elizabeth Hallam
Chronicle of Hainaut by Gilbert of trans. into English by  Laura Napran
Rogers, Clifford. The Encyclopedia of Medieval Warfare and Military Technology, Vol.I
Garnett, George. Law and Government in Medieval and
“The Empress Matilda and Bec-Hellouin” by Marjorie Chibnall in Anglo-Norman Studies X: Proceedings of the Conference 1987 ed. by R.Allen Brown