On Sunday, 19 December 1154, Henry the Young King's parents were crowned king and queen of England at Westminster Abbey by Theobald Archbishop of Canterbury*. The chronicler Henry of Huntigdon expressed the feelings that must have filled all the hearts in the ravaged by the civil war England:

… Henry was crowned and consecrated with becoming pomp and splendour, amidst universal rejoicing, which many mingled with tears of joy!’ (Henry of Huntingdon p.296-97).


The then Henry fitz Empress was staying in Normandy when he learned that on 25 October king Stephen died. ‘… Theobald, archbishop of Canterbury, with many nobles, dispatched messengers in all haste to their now lord the Duke of Normandy, intreating him to come over without delay, and receive the crown of England. Hindered, however, by contrary winds and a stormy sea, as well as other circumstances, it was not till six days before Christmas that, accompanied by his wife and brothers, with a retinue of great nobles and a strong force, he landed in the New Forest. England, therefore, was left for six weeks without a king, but by God’s providence was in perfect tranquility, the love or the fear of the expected king securing it.” The chronicler could not have been the only one who marvelled at the afore-mentioned peace in the prolonged interregnal period, but he was the only one who chose to commemorate it in verse:

The king was dead but kingless England did
not lack peace-
You, Henry, are the first in the world to have
performed this wonder.
Not yet king, not yet present, you
nevertheless can do
What a king was unable to do when present
…
(from England Under The Norman and Angevin Kings 1075-1225 by Robert Bartlett)

In 1152 Henry married Eleanor of Aquitaine (b.1124), the match that was to result in forging the greatest empire of the 12th century-Europe. Henry, already duke of Normandy, heir to England, Anjou and Maine was lucky to win the greatest prize on the then marital market- the former queen of France, Duke William X of Aquitaine’s eldest daughter and heiress, Eleanor. For fifteen years she had been the consort of Louis VII of France (b.1120), but apparently displeased her husband with bearing him only two daughters, Marie in 1145 and Alix in 1151. The marriage was declared null and void on grounds of consanguinity. Henry spent the years 1152-1154 consolidating his position on the Continent and in England, the efforts that resulted in the so called Treaty of Wallingford, by terms of which Henry became Stephen's heir (Stephen's own son and heir, Eustace died earlier in the year) and was to rule England after Stephen's death. When this agreement had been reached no one expected that it was going to happen so soon. 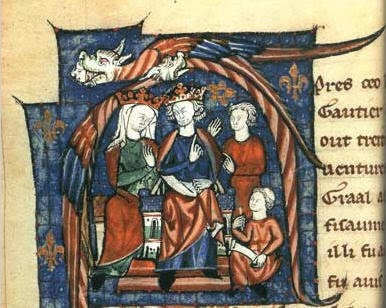 As for Henry's crossing to England, Huntigdon got his dates wrong, for it was actually on 7 December 1154 when the king in waiting, accompanied by his wife, Eleanor and his two brothers, Geoffrey (b.1134) and William (b.1136), embarked at Barfleur. In a violent storm he sailed for the crown of England, landing at Sandwich the following day. Six days before Christmas the coronation itself took place.

Anointed, invested with the sword, bracelets and mantle, Henry was crowned with the imperial crown which his mother the Empress Matilda brought with her from Germany in 1125/26 and which had been worn by her first husband, the Emperor Henry V. The blessing followed. Henry kissed the bishops and was led by them to the throne, listening to the Te Deum. The prayer Sta et retine said, now Eleanor was consecrated and crowned. How, being seventh months pregnant, did she manage to endure the long ceremony, I cannot imagine. The one thing we can be sure of is that her second child by Henry was born exactly seventy-one days later, on 28 February 1155, to go down in history as Henry the Young King.

One of Henry's first actions taken at Westminster immediately after his coronation was expediting the charter according to which he gave to William d'Albini, earl of Arundel and king Stephen's former partisan, the castle and honour of Arundel and the tertium denarium of Sussex. Also, by another charter, he confirmed to William, son of Robert fitz Walter of Windsor, the lands of his late father. The two acts expedited, Henry's long and eventful reign began in earnest.

You can find the text of Henry II Coronation charter here and its English translation here.

And here is the only item out of the old regalia, dating back to Henry II's or his son Richard's coronation. Listed among the secular regalia in 1349 as "one spoon of ancient form" was probably made by "a major late Romanesque goldsmith working in London and is the only piece of goldsmith's work executed for an English royal patron to come down to us from the twelfth century." (Coronation, p.79)

* Theobald (c.1090-1161), the former prior and abbot of the Norman monastery of Bec, later Archbishop of Canterbury, proved to be a moderating influence during the civil war between Stephen and Matilda. Staying loyal to Stephen, as the king crowned and anointed by the church, he remained on good terms with the Angevins at the same time and had a hand in paving the path for Matilda's son, Henry to the throne of England.

The Chronicle of Henry of Huntigdon. Translated and edited by Thomas Forester. Internet Archive of Northeastern University Libraries.

Coronation. From the 8th to the 21st Century by Roy Strong. Harper Perennial, 2005.