On 6 December 1183, six months after Henry the Young King's untimelay death, his father Henry II and his brother-in-law Philip of France met at the peace conference between Gisors and Trie, where the former did homage to the latter “for all his lands beyond the sea, whereas before this he had never been willing to do homage to him” (Howden, Vol.II, p.31). The two kings also came to terms over the Norman Vexin, which Philip's half-sister, Marguerite had brought into the Angevin domains in 1160 upon her marriage to the Young Henry. It was agreed that for quitting claims to the Vexin and all the castles and fortresses given to her and her husband by her father Louis VII on their marriage, Marguerite should receive, one thousand seven hundred and fifty pounds money Angevin, "each year at Paris from our lord the king of England and his heirs, as long as she lived" (Howden, Vol II, p.28). They also discussed the fate of Marguerite and Philip’s sister Alais, who had been betrothed to Richard and stayed with the Plantagenets for many years now. Henry promised that if she were not wedded to Richard, she should be married to John. But before the afore- mentioned conference, when the Young King still lived there were many other events that took place in the months of December over the years.

1 December 1135. After 35-year reign Henry the Young King’s paternal great-grandfather and namesake, Henry I of England died. His was an eventful reign marked by legal and administrative changes that assured prosperity and peace in both England and Normandy. To learn more about the circumstances of his death and of the king himself click here. 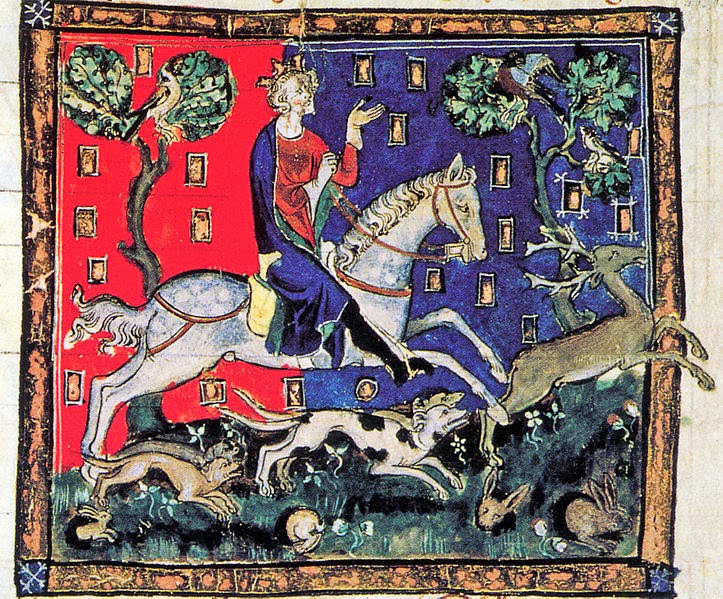 1 December 1170. Thomas Becket, Archbishop of Canterbury, after an absence of six years returned to England accompanied by his faithful followers Hardly had his party disembarked at Sandwich when the royal officials at the head of the armed troops stopped them and tried to seize the Archbishop. The latter was set free only after showing the king’s letter of safe conduct. On his way to Canterbury Thomas was met with the enthusiastic reception especially by the poor people of the realm. A week after his return to England Becket set off for Winchester, by way of London, to pay respects to his one-time ward and new king, young Henry. Knowing the latter’s love for horses, Thomas ‘brought with him three costly chargers, of wondrous speed, beautiful in form, high-stepping, their delicate flanks rippling as they walked, their housing worked with flowers in various colours, which he intended to give as a gift to his new lord.’ (William fitz Stephen in Meade, p.313-14) Shortly before he set off, Thomas sent Richard of Dover ahead to announce his arrival. When already in Winchester, Richard was met with a cool reception. The fifteen-year-old king’s guardians, officials and courtiers were mostly hostile to the Archbishop and took care to reduce the access to their young lord. Thus the archbishop managed to travel only as far as London when he was halted by Josceline de Louivain and Thomas de Tunbridge, the messengers from the Young King. The latter refused to meet his one-time tutor and forbade him to continue the progress. Thomas was to return to Canterbury immediately.

1 December 1177. As Ralph of Diceto reports: high wind came from the east, destroying woods and buildings.” (p. 152) Fortunately, Henry was safe staying on the Continent at the time.

4 December 1214. King William I the Lion of Scotland died and was succeeded by his son, king Alexander II. One of the most vivid figures of the twelfth-century Britain he was the one-time ally of Henry the Young King in the latter's Great Revolt against Henry II.

7 December 1154. Henry the Young King’s father, the then Henry Fitz Empress, accompanied by his wife, Eleanor of Aquitaine and his two brothers, Geoffrey and William, embarked at Barfleur and in a violent storm sailed for the crown of England.‘… Theobald, archbishop of Canterbury, with many nobles, dispatched messengers in all haste to their now lord the Duke of Normandy, intreating him to come over without delay, and receive the crown of England. Hindered, however, by contrary winds and a stormy sea, as well as other circumstances, it was not till six days before Christmas that, accompanied by his wife and brothers, with a retinue of great nobles and a strong force, he landed in the New Forest. England, therefore, was left for six weeks without a king, but by God’s providence was in perfest tranquility, the love or the fear of the expected king securing it. Upon the landing he [Henry] proceeded toLondon, and, ascending the throne of England was crowned and consecrated with becoming pomp and splendour, amidst universal rejoicing, which many mingled with tears of joy!’ (Henry of Huntingdon p.296-97). Henry safely landed at Sandwich the following day. On 19 December he and Eleanor were crowned king and queen of England by Archbishop Theobald of Canterbury at Westminster Abbey.  At the time of the coronation Eleanor was expecting her second child by Henry. The princeling would be born seventy-one days later, on 28 February 1155, would be given his father’s name and would go down in history as Henry the Young King.

8 December 1174. The treaty of Falaise was confirmed in another charter at Valoins. By its terms, to gain his release, William I of Scotland promised to do homage for Scotland to Henry II, give his brother David as a hostage and surrender the five main castles of Scotland:Edinburgh, Jedburgh, Roxburgh, Stirling and Berwick. “The Scottish Church was to be subject to the jurisdiction of that of England” and William’s nobles and clergy were to make their personal submissions to Henry. The king of England made it clear that he considered the question of Northumberland definitely closed. The treaty was confirmed on 10 August 1175 at York in a great ceremony. It was then when William and the Young King met again, both of them humiliated and downhearted. The former forced to ‘publicly performed homage and fealty to Henry II explicitly for his kingdom as well as his estates in England’, the latter involuntarily accompanying his father in his travels around England, reduced again to what he must have considered “house arrest”. William was released from Falaise and allowed to return to his kingdom on 11 December.

12 December 1212. Henry the Young King’s half-brother, Geoffrey, Archbishop of York died at Notre-Dame-du-Parc near Rouen. Little is known of Young Henry and Geoffrey’s relations save the fact that they stood on the opposite sides in the Great Revolt of 1173-74. Geoffrey played a prominent part in the suppression of his younger brothers’ rebellion in the north and midlands of England. Later, after the Young King’s untimely passing, Geoffrey, already Archbishop of York made a grant for his late brother’s soul.

21 December 1192. On his way back home from the Holy Land, Henry the Young King's brother Richard, the king of England was captured by the Duke of Austria. He was to spend two years in German confinement until released in 1194.

24 December 1167. Henry the Young King’s youngest brother John [Lackland] was probably born on this day at Oxford, although 27 December, the feast day of St John the Evangelist is also a probable date. The matter of John’s inheritance would push the Young Henry into fighting over what he considered rightfully his and spark off the Great Revolt of 1173-74

25 December 1172. Ralph of Diceto again: “On Christmas night, thunder was heard in Ireland and England and in all of France generally, Sudden and dire, portending something great, new and unusual.” (p. 121) It must have been heard by both Henry and Marguerite, who held their Christmas court in Normandy, and by Henry II and Eleanor at Chinon.

29 December 1170. Archbishop of Canterbury, Thomas Becket, one-time friend and chancellor of Henry II and Henry the Young King’s tutor was murdered in his own cathedral.