The Wedding at Newbourg and Other November Anniversaries

Happy 854th Wedding Anniversary to Henry the Young King and Marguerite of France, who (were) married on 2 November 1160, at Newbourg, Normandy, with the sanction of Henry of Pisa and William of Pavia, the papal legates. The sad thing is that Henry's father, king Henry II, whose ambitions seemed boundless, deprived his son and his daughter-in-law of the memories of their Big Day. "How?" you may ask... after all there was nothing unusual about their arranged marriage. The answer is simple: on 2 November 1160 the bridegroom was five and the bride two years old. In the age of marriage contracts and early marriages among the nobility, young age of a bride was the order of the day, still the age of both Henry and Marguerite sparked disputes among their contemporaries, after all, as Roger of Howden put it,: "they were but little children crying in their cradle." But Henry II himself did not share the popular sentiment and little wonder, Marguerite brought the Norman Vexin- a heated point of contention between England and France- back under Angevin rule through her dowry*. 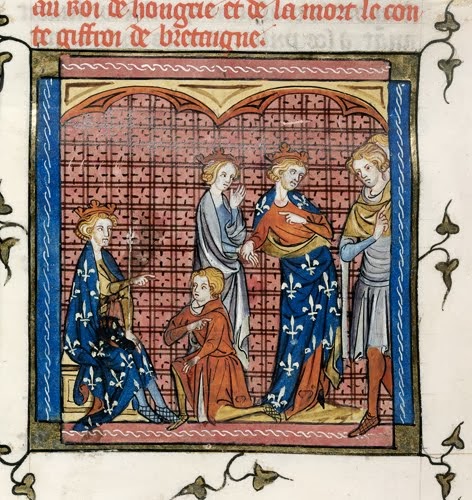 Philip Augustus gives his sister Marguerite, the widow of Henry the Young King, in marriage to Bela III, the king of Hungary (image: Wikipedia)

Let me present other November anniversaries:

1 November 1141: Important day for Henry the Young King’s grandmother, Matilda. On this day the warring factions released her cousin and enemy, King Stephen, and her brother and ally, Robert of Gloucester, in an exchange of prisoners. Early in the year, on 2 February King Stephen had been captured at Lincoln,a contingent under the command of William of Ypres. Taken by surprise, the Empress had been able to escape only thanks to her half-brother, Robert who had been captured. Without his steadfast support she had no chance to win her cause. She had no other choice but to win his freedom by releasing Stephen.

c. 1 November 1172: Henry the Young King and his queen, Marguerite, staying in England after their Winchester coronation (27 August) were sent by Henry II to Normandy; c.7 November they paid a visit to Marguerite's father, Louis VII of France. The latter's counsels were to persuade the Young King to rebel against his father (the rebellion broke out the following spring)

1 November 1179: Henry the Young King accompanied by his younger brothers, Richard, duke of Aquitaine and Geoffrey, duke of Brittany represented the House of Anjou at the coronation of his brother-in-law, Philip, later known as Augustus. On All Saints’ Day, following Capetian tradition, fifteen-year-old Philip was anointed and crowned at the cathedral of Reims by the archbishop of Reims, his uncle, Guillaume aux Blanches Mains. At the time of the ceremony, Philip’s father, Louis VII was yet alive, but “labouring under old age and a paralytic malady” unable to attend. Henry the Young King carried Philip’s crown in the procession and supported his head during the coronation.

1 November 1191: Henry the Young King’s illegitimate brother, Geoffrey, having been nominated Archbishop of York by his brother king Richard I in 1189 and consecrated on 18 August 1191, was eventually enthroned on 1 November the same year. Geoffrey had been his father’s chancellor and stay with the old king till the very end, “…secular office in his father’s service…” having been his true vocation. As the archbishop, Geoffrey possessing “an impracticable self-will and an ungovernable temper”, became notorious for the quarrels with his canons. His dispute with his younger brother, King John over taxing church revenues for the royal treasury in 1207 ended up with Geoffrey’s escape. He died a bitter man at Notre-Dame-du-Parc near Rouen on 12 December 1212.

2 November 1164: Four years after the young Henry’s wedding, the person responsible for arranging the match, Thomas Becket, already Archbishop of Canterbury, and already in exile landed in Flanders accompanied by two canons and a servant, carrying with him only his pallium and his archiepiscopal seal. One time chancellor would stay on the Continent for six years, spending most of his time at the Cistercian abbey of Pontigny. He would return to England on 1 December 1170 only to be murdered twenty-eight days later at the steps of his own cathedral.

4 November 1174: As Ralph of Diceto noted: “... at about midnight, for the space of an hour and more the whole of the northern sky was observed to be a bloody red colour.” (The Plantagenet Chronicles, p.140) Such occurrences were usually interpreted as bad omen heralding oncoming disasters.

6 November 1153: Long-awaited day for Henry the Young King’s father, Henry Fitz Empress. By the so called treaty of Wallingford [or Winchester] he was recognized as King Stephen’s heir and adopted son. Stephen “worn out by war and saddened by the deaths of his wife and son” signed and agreement that Matilda’s son would succeed him.

13 November 1160: Henry the Young King’s father-in-law, Louis of France (1120-1180) married his third wife, Adela of Blois. His second wife, Constance of Castile had died giving birth to yet another daughter and Louis, never giving up hope to sire a male heir, did not waste time. As Ralph of Diceto noted in his usual matter-of-fact manner: “The queen of France, daughter of Alfonso, Emperor of Spain, died in giving birth to a daughter who fortunately survived. King Louis, however, did not observe the proper time of mourning but within two weeks had married Adela, daughter of Count Theobald of Blois”. One may find it the most unusual action taken by usually monkish king, but in 1160 Louis was already forty and the father of four daughters. No wonder he was in a hurry and to the good effect. Five years later Adela gave him a much-awaited son, Philip.

18 November 1169: Henry the Young King’s father met Louis VII at Montmartre to discuss the reconciliation between the English king and the exiled Archbishop of Canterbury, Thomas Becket, whom the king of France, acting as a mediator, had taken under his protective wing. Despite the promising beginning- Henry II promised to withdraw all obnoxious usages and customs and guarantee full freedom to the Church when matters of appeals and visitations were concerned and the Archbishop, in his turn, agreed to omit the saving clause and return to England at once- the meeting ended in failure. The reason being Thomas Becket’s obstinacy. He demanded the kiss of peace, saying that “he would not for the present make peace with the king, unless, in accordance with the pope’s advice, it was ratified by the kiss of peace” as the guarantee of his safety. This was met with the king’s refusal, who “weary after a full day and with this long night’s ride before him, again and again cursed the archbishop on the way, reckoning up and recapitulating the labours, vexations and distresses which he had caused him”.

18 November 1189: Henry the Young King’s brother-in-law, William II of Sicily, frequently referred to as William the Good, died, aged thirty-five. He married Young Henry’s youngest sister, Joan in 1177. He was twelve when he assumed the throne and before he reached maturity his mother, Margaret of Navarre ruled in his name. When he could finally rule on his own he proved to be strong and capable ruler, a worthy match to his grandfather, Roger II. Notable for his foreign policy, he did little to diminish the model of monarchy introduced by his predecessors. Through his splendid marriage in 1177 he gained a powerful ally, Henry II of England.

21 November 1181: Roger of Pont l’Eveque, Archbishop of York died. By some called “… a learned and eloquent man, and in worldly affairs, prudent almost to singularity…” by others simply “a devil”, it was he, who, acting at Henry II’s order, in 1170 crowned the Young Henry king of England in Westminster Abbey, in the absence of the exiled Archbishop of Canterbury, Thomas Becket.

25 November 1120: There would have been no King Stephen, no Lady of the English**, no Henry II and no Henry the Young King had not the White Ship sunk on a cold November evening near Barfleur, burying the hopes of many, both in England and Normandy. On its deck there was the cream of the young Anglo-Norman aristocracy, with Henry I’s only legitimate son and heir, William Atheling among them. Being notorious for his out-of-wedlock activities and constant violating of his marital vows, Henry I, the father of more than twenty bastard children, had been able to produce only two legitimate children in the eight years of his marriage to Edith-Matilda, the Good Queen. These were Matilda ( b. 1102) and William (b. 1103). The latter’s death in the White Ship disaster and his father’s subsequent failure to produce a legitimate male heir form his second marriage led to the succession crisis and the nineteen years of the darkest period in the history of medieval England, the Anarchy.

c. 29 November 1181: Henry the Young King, together with his brothers, Richard and Geoffrey, came to his brother-in-law's aid. The young Philippe Capet badly needed support in the war against Philip, Count of Flanders, who attacked his lands. Thanks to Henry II and his three eldest sons he emerged as a victor.

* Marguerite’s dowry, the Vexin- an area of northern France that bordered Normandy-had been given to Louis by Geoffrey of Anjou [the Young Henry’s paternal grandfather] as the price of his son Henry’s [future Henry II] recognition as Duke of Normandy. Henry never doubted that one day he would win it back.

** Lady of the English, “Domina Anglorum”, Henry the Young King’s grandmother, Empress Matilda, daughter of Henry I, who, upon her younger brother, William Adelin’s death in the White Ship disaster became her father’s sole heir. Her struggle to win back what she considered rightfully hers plunged England in the civil war that was not to be ended until her eldest son, Henry of Anjou ascended the throne in 1154.

The Annals of Roger of Howden. Vol I. Trans. by Henry T. Riley. Internet Archive of Northeastern University Libraries

The History of the English by Henry of Huntingdon in The Plantagenet Chronicles ed. by Dr Elizabeth Hallam

Images of History by Ralph of Diceto in The Plantagenet Chronicles ed. by Dr Elizabeth Hallam

Roger of Wendover’s Flowers of History Vol. II translated into English by J. A. Giles

Henry I: king of England and Duke of Normandy by Judith A. Green

Materials for the History of Thomas Becket, III by Herbert of Bosham in English Historical Documents 1833-74 ed. by David Douglas and G.W. Greenaway

The English in the Twelfth Century. Imperialism, National Identity and Political Values by John Gillingham

Eleanor of Aquitaine by Marion Meade

Historical Dictionary of the British Monarchy by Kenneth J. Panton