Dear Henry the Young King Readers, His Majesty's loyal servant and scribe has slipped on the icy pavement and had her hands badly bruised, hence the minor delays in writing and posting. Don't worry - she keeps the new posts coming even if only in her head :-). Now she has a request to make: there are a few of her Henry the Young King posts to be read or re-read. Firstly, Charming, Vain, Idle Spendthrift in which she made a heroic try to take a closer look at Henry's character; secondly, as the 7 and 8 December marked the anniversary of Henry's parents' crossing to England to be crowned king and queen on 19 December 1154, her last year's post about the ceremony here and the opening chapter of Ms Elizabeth Chadwick's novel, The Winter Crown, in which Henry the Young King plays a very important role here :-); thirdly, to learn what Henry's contemporaries thought about their young lord, here's her post entitled A Lovely Place of Sin.

Ms. Marsha Lambert is Henry's guardian angel, but also a writer and reviewer. Here's her brilliant post about the authors of historical fiction we all admire and love, Ms Elizabeth Chadwick and Ms Sharon Kay Penman. Our friend and fellow blogger Ms Anerje has written a few fascinating posts about her beloved Piers Gaveston here, here and here - highly recommendable. I would also like to share with you Ms Kathryn Warner's latest post here and Ms Gabriele Campbell's text here. Henry the Young King Blog celebrated its second bloggiversary by hosting our dear friend and gifted writer Ms Joan Battistuzzi. Read a fascinating account of her September trip to England here.

And don't forget about my new blog devoted entirely to Henrys - you can find some interesting stuff here. The emperors, kings, princes, dukes and counts sharing this very special name would be grateful for your kind support :-) 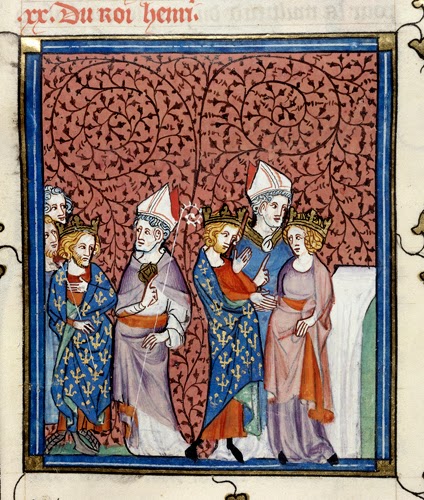 Henri I of France and Anne of Kiev (image: Wikipedia)