I would love to wish a Merry Christmas and a Happy New Year to all followers of our blog. May 2016 be a blessed and peaceful one and may all your plans come to fruition. We will be back after the Twelve Days of Christmas.On a Christmas note and as a Christmas gift, let me recommend a few interesting texts. 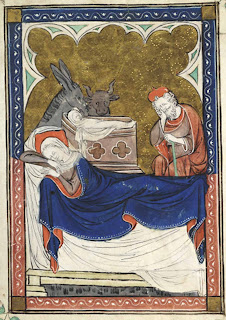 Firstly, one of my previous posts, in which I described Henry the Young King's Christmases over the years.

Young King Henry Looked Out On the Feast of... Christmas

As Christmas is coming with the family meetings, Christmas trees, decorations and presents, let me wish you a wonderful festive season filled with joy, celebrating and carol singing, all the things that were already known and practised by medieval people to commemorate the birth of Christ.

I’ve been wondering how the twelfth-century English king spent the Twelve Days of Christmas. First and foremost, he did not always spend them in England, but also on the Continent (remember: at the time the English king’s continental possessions far surpassed those of his overlord, the king of France). Henry the Young King spent only seven out of his twenty-eight Christmases on English soil. The remaining twenty-one he did pass in his father’s continental domains. Some turned out to be quite memorable, the other less...

And here's an article by Ms Elizabeth Chadwick discussing Henry II's Christmas courts held at Chinon, one of his main residences:

If it's Christmas it must be Chinon... the festive season itinerary for Henry II

Medieval kings, especially Angevin ones were a busy,  peripatetic bunch.  If they stayed in the same place more than a week it was a miracle. The task of government in the Angevin period was a hands on one. The King had literally to be seen exerting his authority and the royal itinerary was one of pillar to post and back again across England, and vast swathes of what is now modern day France, not to mention Ireland.  Accommodation was generally the Medieval equivalent of a five star hotel, often with a splendid few days' hunting laid on for the benefit of the King and courtiers.  Much of the royal finery was carried in the baggage wains that lumbered to the same destinations as their sovereign, although frequently along different roads or earlier in the day...

Finally, interesting and entertaining post about some memorable Christmas courts held by Henry II and other Plantagenet kings:

Christmas with the Plantagenets

Our vision of the Christmases of “Merrie Olde England” has been formed by Charles Dickens. In his classic A Christmas Carol, he described a gleeful “Christmas Past” filled with music and merriment.

The celebration described by Dickens was so timeless that the Plantagenets themselves would have felt at home. And, if Dickens had been transported from Victorian England to their much earlier England, he would have immediately been at ease....