Queen Eleanor's Sense of Sorrow. A Guest Post about Eleanor of Aquitaine's Reactions to The Young King's Death

Today I am delighted to welcome my friend Ulrik Kristiansen with the last installment of his four-part Eleanor of Aquitaine and Henry the Young King series, in which he is going to discuss the mother's reaction to the sad tidings about the untimely death of her second-born son. Over to you, Ulrik... 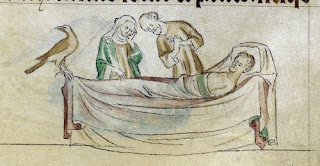 Finally I can share with you my last post about Eleanor and Henry the Young’s relation. You can read the first three posts  here, here and here.
You readers know of course that Henry the Young King met his untimely end in the summer of 1183, only 28 years old. He died of dysentery whilst campaigning once again against his estranged father, King Henry II. In this post I’ll try to see that sad event from the perspective of his mother, Queen Eleanor, who still at the time was in custody (imprisoned, if you will) at Salisbury Castle in England, due to her participation in the failed 1173-rebellion against Henry II.You can read two excellent posts by Kasia about the last days of The Young King below. Even if you have read them I urge you to peruse them again, to get a flavour for just how big an event this was - the heir to the throne, and - to many - the epitome of chivalry, the dashing young royal heir to the Angevin Empire … gone, just like that. Here is the dramatic story:https://henrytheyoungking.blogspot.dk/2013/06/safe-passage-to-heaven_371.html
https://henrytheyoungking.blogspot.dk/2013/06/over-his-dead-body.html


I think the answer is obvious, but I will leave it to you to imagine more in detail just how she felt and when she felt it. Eleanor was not a glittering myth but she certainly wasn’t a machine either. Whenever we try to reduce her to either myth or machine we take away something from her as a complete human being and woman. We diminish our sense of what it must truly have been like, in all its facets, to be the mother of England’s lost king ...