'An Act Without Example in this Kingdom': Samuel Daniel on Henry the Young King's Coronation

Two months have passed since my copy of Henry the Young King biography by Professor Matthew Strickland arrived and I think it is a high time to make my reflections and thoughts into a series of posts.

Since I did not realize that Samuel Daniel, poet and historian closely associated with the court of King James I of England and Queen Anne of Denmark, discussed Henry's life and career in his Collection of the History of England (1618) - deep gratitude towards Professor Strickland for bringing it to my attention - let me begin with Henry's reputation and how he was remembered and perceived back in the 17th century, for as it turns out,  he was not utterly forgotten at the time. 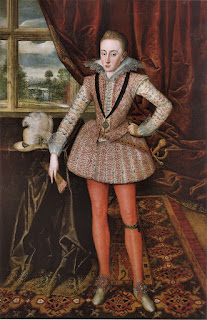 Daniel's work dedicated to the royal couple, especially the part in which he reflected on the career of Henry II's eldest surviving son and heir, must have  - as Professor Strckland points out - revived memories of James I's eldest son and heir also named Henry, whose life was too, as the life of Henry the Young King, "cut short" and who died "in the flower of his youth", aged 18, in November 1612. He, like the Young King before him, met an untimely death, also through ilness. Courtly, charming and excelling in martial arts, his untimely passing caused a universal outpouring of grief, bringing to mind equally charming, equally courtly and, at the time of his death in the spring of 1183, equally mourned Henry the Young King. In 1618, when Daniel's work was published, memories of the promising young Henry Frederick, Prince of Wales, must have been clear and painful and parralels between him and Henry the Young King all too striking (as they still seem today). With one notable exception - Henry Frederick had not been crowned king and he had never come into conflict with his father.

But now with what reservations this was done we are not particularly informed: whether there was an equal participation of rule, or only but of Title; and that the Father, notwithstanding this act, was to have the especial manage of the Government, and the Sonne, though a King, yet a sonne with limited power.

Let us focus on Samuel Daniel's reflections on the Young King, especially on the latter's controversial coronation. As you can remember Henry II's decision to have his eldest surviving son and heir crowned when he himself was still an active ruler (relatively young and enjoying good health) stirred up fierce controversy and fuelled the then and future conflicts*. Perhaps not directly, but it did cost Thomas Becket his life and thus was a harbinger of serious trouble for Henry II. Had the latter foreseen what additional far-reaching and devastating consequences it would arise, he would have reconsidered. Although, on the other hand, back in 1170, it could have turned out to be the ingenious strategy, for Henry II fell ill. The seriousness of the situation made him point in his will the freshly crowned Young King an official guardian of John, his youngest son. Had the father died, there would have been no disputes over who should take over the throne and smooth and peaceful succession would have been assured - as Henry II's intention was when he had come up with the idea of the young Henry's coronation. After all, associative kingship had worked for some of the continental rulers. It worked for Louis VI of France in 1137 and was to work for his son Louis VII in 1179, to provide examples from the closest "neighbourhood". Henry II had every right to hope that it would also work for him and his family. The memories of the disorder and chaos brought upon England by the civil war over succession between his mother and King Stephen must have been vivid in his mind. However, in his work Samuel Daniel apparently did not remember Henry II's bout of illness and how fragile peace could have proved to be twenty years after the time when 'Christ and his saints slept over England', for his opinion was, here let me quote: 'the King of England stood safe enough and was like to have his business runne in a strong and entire course', but by having his son crowned 'hee lays open a way both to disjoynt his own power and embroil his people open to division'. It was 'the love he bore his sone' and conviction that paying homages were not enough to assure peaceful succession that pushed him to carry out that perfect - as it must have seemed - scheme. Daniel also marvelled at how strange it was that 'a Parliament, an assembly od State, convoked for the same businesse, would in so wise times, consent to communicate the Crowne, and, and make the commonwealth a Monster of two heads'. And indeed, the period of time between 14 June 1170 and 11 June 1183 showed that the two heads, the older one and the younger one  could not reach agreement - the older one stubbornly and repeatedly refused to share power and lands with the younger one; the younger one stubbornly and repeatedly refused to be a king only in name and do the older one's bidding all the time. Mutual distrust, suspicion, ambition and greed for power fuelled the family conflict which was not going to be brought to a halt even by the untimely and sudden death of the younger Henry. Of course, we cannot disagree with Daniel, who observed that Henry's coronation had been 'an act without example in this Kingdome' and that 'this young King shewed shortly thereafter that a Crowne was no state to be made over in trust, and layd much griefe, and repentence, upon his father's forwardnesse', but, on the other hand, we are fully aware that Henry II's predicament was in a great measure his own doing. It was to be fully and conclusively proven after Henry the Young King's death. Henry II's strained relationship with his younger sons, however, is a subject for a separate post.

The quotes from Sameul Daniel's Collection of the History of England all come from Henry the Young King. 1155-1183 by M.Strickland

* When it comes to the validity and legality of Henry the Young King's coronation, Professor Strickland stresses that it was Thomas Becket's death that changed the contemporaries' opinion on it, turning it into an illegal and unlawful act. Before Thomas was butchered in his own cathedral and subsequently proclaimed a saint, 'contemporaries - including Thomas himself - were anxious to stress that the usurpation of Canterbury's prerogative in no way detracted from the legitimacy and sacrality of the Young King's regal status' (Strickland, p. 321).