The anniversary of Henry the Young King's untimely passing is fast approaching and though I have discussed the surrounding events many times here, on the blog, I have never focused solely on the version introduced by one John, the author of the History of William Marshal. If we are believe to him, this is what happened in the spring of 1183 and these are the roots of the conflict that broke out between the Angevins, the conflict in which brothers stood against each other, and sons stood against father (following the translation by Nigel Bryant): 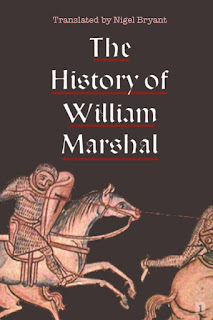 '(...) the following Lent saw conflict between the three brothers. The Young King and his brother Count Geoffrey, lord of Brittany, angrily left their father, offended and enraged that their brother, the count of Poitiers, with their father's backing, had made so bold as to wage war on the highest nobles of that land and to treat them most unjustly. They'd complained to the Young King and declared that they would sooner serve him than their lord who wronged them so - indeed, they were his liegemen, having paid him homage, and would no longer acknowledge Count Richard of Poitiers as their lord when he wilfully mistreated them. The Young King and his brother Count Geoffrey protested to their father about the count of Poitiers's abuse of his men, but their father said:
'What's it to do with you? I've given him the land. If any of them wage war on him I hope he takes them on and theaches them a lesson!' (Henry II saw the Poitevins as a constant cause of trouble)
The Young King replied, in short: 'They've long been my liegemen: it would be wrong of me to fail them and let them be so abused! It's only right that I go to their aid!'
'Very well!' said the father. 'Off you go and help them!'
With that they left, and a conflict started that wasn't resolved till all parties had thoroughly suffered, as everyone knows, and you'll hear exactly how in what follows...'
(pp. 93-94)

As we remember, by "They've long been my liegemen" Henry the Young King meant that he allied himself with the Poitevin barons a year before the described events, in the spring of 1182, when he visited Aquitaine. The fact that Richard's disgruntled barons approached him on the occasion served his own purposes well - the chance to win some land for his own came his way and he couldn't let it slip by. Especially that his father kept denying him independent rule and lands rightfully his.