Today I am very happy to welcome Richard Willis, the historian and friend of mine, to the blog. Richard has kindly decided to share his thoughts on the passing of Richard I the Lionheart, Henry the Young King’s illustrious younger brother and famous crusader king. The latter died on 6 April 1199 at Châlus. For centuries the circumstances of his death have been the subject of heated debates.

Over to you, Richard!

The date is 6 April 1199 – the Tuesday before Palm Sunday. The location is the , part of the duchy of , ruled at the time by the great matriarch Eleanor. Her union with the English king Henry II produced eight children – seven of who survived infancy – but there was one she valued above them all. It is that child, her fourth, that she is standing vigil with, for the hour of his death has come.
Just forty-one years old at the time, Richard, king of England – already in possession of that famous sobriquet “Lionheart” – had been the second son of Henry and Eleanor to wear the crown of England (though he was the first to do so in his own right, and not as a junior king, as his elder brother Henry had). Acknowledged by all – even his enemies – as one of the greatest soldiers and commanders of his era, Richard had come through rebellion, crusades and captivity to win the renown of many of his subjects.
Yet despite his renown and record in battle, he was still beset by adversaries, both inside his kingdom and outside it. Much has been made of Richard's clashes with both Philippe II, the king of France, and John, Count of Mortain, his younger brother. Yet it was neither of these great lords that sparked the incident which led to the wound that has brought the Lionheart to the edge of death.
Indeed, at the moment, brother John is faithful (something that didn't happen very often) and Philippe has been placated via truce, allowing Richard free reign to deal with two of his mutinous nobles, Aymer, count of Angoulême, and Aimar, viscount of Limoges. It was to Aimar's lands that the king moved first, investing the  late in March.
It was a move that, like so many others made by Richard, shocked others. It was the season of Lent, during which the Church prohibited warfare – though that was a prohibition often flaunted by the English king. Indeed, Ralph of Coggeshall writes that the king “devastated the Viscount's land with fire and sword, as though he did not know that arms should be laid aside during Lent,” and Bernard Itier adds that Richard “had planned to destroy all the viscount's castles and towns.”
That the king's aim was to completely devastate the lands of his rebellious vassals is not much in doubt – that was the common price paid by rebel lords – though many chroniclers say that there might have been other reasons for Richard's rush to war. Ralph of Coggeshall notes that “some people say that a treasure of incalculable value was found on the Viscount's lands,” and that Aimar's refusal to hand the find over to his liege lord (or perhaps, hand over more of it than Aimar was willing to part with) helped to inflame the already fierce temper of the English king.
Not all the accounts, however, mention the treasure, and in hindsight, its existence is really beside the point. Regardless of whether or not he was lured by treasure, the Lionheart brought his wrath down on the viscountcy of . The nobles of this region were oft rebellious, and there's no doubt that Richard probably thought that this would go as so many previous suppressions had – over soon enough that he could turn his mind back to diplomacy with the king of France. 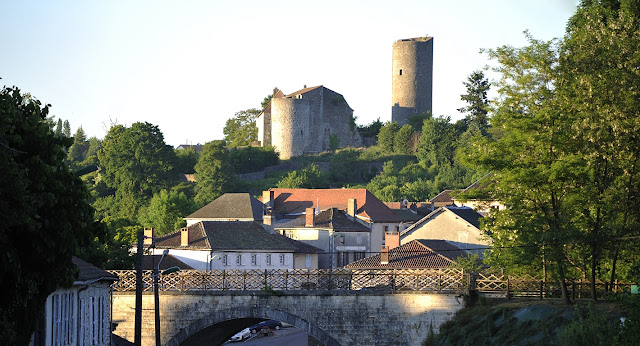 Château de Chalus-Chabrol today. Photo courtesy of Office de Tourisme Chalus
So it came to pass that, in the evening of 26 March, a few days into the siege of Chalus-Chabrol, Richard started to make his observation of the progress of the siege. As he often did, the king took a chance to practice with a crossbow. By all accounts, the forty man garrison of the castle, led by two knights, Peter Bru and Peter Basil, was on the verge of surrender. Indeed, as Richard made his rounds, there was only one defender present on the ramparts – using a frying pan, of all things, as a shield. Though the lone defender was probably an irritant to the professional soldiers besieging the castle, Richard himself wore no armor save for his headpiece – after all, what protection was needed when the king wasn't riding into battle?
More often than not, that would've been a rhetorical question. Indeed, Richard is said to have applauded the lone defender, even while the crossbowman was firing at the king. The applause was premature, the defender's aim true – and the Lionheart was too slow to duck and prevent the crossbow bolt from going into his left shoulder. Conscious of what the news of his injury could do to the morale of his soldiers, the king said nothing and returned to his tent.
His own attempts to remove the bolt failed. All Richard succeeded in doing was breaking the wooden shaft off, leaving the hand-length barb deep inside. The king's surgeon had better luck, but though he had removed the bolt, he had not done a very good job of it. Within days, the wound turned gangrenous, spreading the infection throughout his body.
Richard had been a man of war. There's no doubt that he knew exactly what was happening, and this is evidenced by what he did next. Aside from four of his trusted associates, the king forbade anyone from entering his tent. He sent for the Duchess of Aquitaine, his mother, and after Chalus-Chabrol fell a few days later, sent a number of his soldiers on to invest two more of Viscount Aimar's castles, Nontron and Montegut.
The crossbowman who had fired the fateful bolt was brought before him. Though the chroniclers disagree on the defender's name (indeed, Bernard Itier – normally one of the more reliable sources – says that it was the knight Peter Basil who fired the crossbow), they do agree on what happened next. Instead of having the man executed, Richard, in a last act of mercy, pardoned him, and ordered him to be given 100 shillings and set free (something that didn't happen – Richard's faithful mercenary Mercadier had the man flayed alive and hanged after Richard had died).
Shortly after nightfall on 6 April, after twelve days of lingering, Richard, king of , died. His reign – three months short of a decade – had seen him successfully defend his inheritance and pass it on. With no heirs of the body save for an illegitimate son, Phillip of Cognac, the crown of  was disputed. Angevin law dictated the throne should pass to Arthur of Brittany, the son of Richard's younger brother Geoffrey, while Norman law held that the youngest son of Henry II, John, had precedence over any of the old king's grandchildren.
Some accounts say that Richard finally acknowledged John as his heir on his deathbed, but whether or not that was true, a 32 year old man was better equipped to fight for and hold the Angevin inheritance than a 12 year old boy, and John did eventually come to hold the full portion of Richard's kingdom – though he would not hold parts of it for very long.
That, however, is another story. After his death, Richard's entrails were buried in Châlus, his heart in Rouen Cathedral (across the altar from the tomb of his older brother, with whom Richard had often quarreled), and his body at Fontevraud Abbey in . On 11 April 1199, Palm Sunday, Richard I of  was laid to rest at the feet of his father, a location that probably would have struck both father and son as ironic.
Though he took great care never to expose his soldiers to undue risks, he had no such qualms about doing so himself – and knowing that, his manner of death does not seem so out of character. Indeed, the surprise is not that he died in battle, but that it happened in such a battle. Fate, it seems, has a sense of humor – though this probably was not a joke that the Lionheart would have laughed at.