Henry the Young King: Top Star in the Tournament World

‘Young King Henry, the king’s son, left England and passed three years in tournaments, spending a lot of money. While he was rushing around all France he put aside the royal majesty and was transformed from a king into a knight, carrying off victory in various meetings. His popularity made him famous…’ – the chronicler Ralph of Diceto, in an entry for the year 1179.

The 12th century saw the rise of tournaments as one of the main features of aristocratic life. As Professor David Crouch points out ‘everyone who was anyone in the western aristocracies took to the fields of northern France…” One reason that aristocrats and knights were fascinated by the tournament was that they could parade their skills and thus win fame. The other was the sheer joy of participating. Of course, they could also reap a profit on it, especially landless knights such as William Marshal. William’s fortune rose with the Angevin kings of England. Promoted by Eleanor of Aquitaine herself he was appointed tutor of arms to her eldest surviving son, Henry (since the day of his coronation called The Young King). 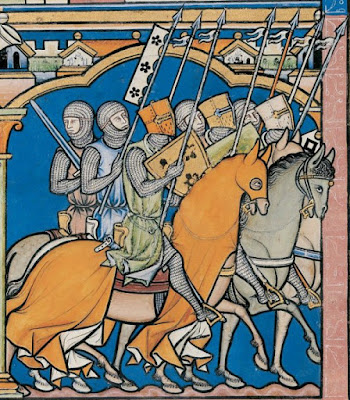 As Henry and William travelled the tournament world far and wide, their adventures and exploits became stuff of legends, later described in vivid detail by William’s first biographer, the author of The History of William Marshal.

William’s young lord was the champion and patron of the tournaments. And although most of the contemporary chroniclers were unanimous in finding it his unforgivable sin, he won fame rushing all over France and participating in virtually all possible meetings. Thus his career cannot be understood without appreciating how he made the international tournament circuit his very own...

Recently we have had an opportunity to write a guest post for medievalists.net about Henry the Young King and his tournament career. Read more here.