A Little Lower Than the Angels: Images of Henry the Young King

Before I focus on the depictions of Henry the Young King that have survived to our days, I would like to express my gratitude to Ms Elizabeth Chadwick for inspiring me to write this post. As it happens, a few days ago I came across her blog post, in which she recommended a new Eleanor of Aquitaine book, Inventing Eleanor by Michael R. Evans. Read Ms Chadwick's post here. To my utter delight, in his work Mr Evans mentions my favourite authors of historical fiction, both Ms Elizabeth Chadwick and Ms Sharon Kay Penman! I am so very happy to see their names in a book on Henry's mother, whom both ladies brought vividly to life. Fully deserved. We all can learn history from their brilliant novels.

Now back to our Henry. I have already discussed how he looked like in one of my previous posts. His contemporaries seemed unanimous when describing his physical appearance.

"He was tall in stature, and distinguished in appearance... Fair among children of men” from Otia Imperialia by Gervase of Tilbury, Henry's former chaplain, written in the early 13th century for Henry's nephew, Otto of Brunswick, Holy Roman Emperor (1175-1218).

"Of his beauty, of his largesse, of his goodness, of his prowess, you could say much” and "King Henry the young was acclaimed king who was so handsome and brave and a noble young man”. From The Becket Leaves, written by the anonymous author (one of the candidates is Matthew Paris) in the 13th century(http://www.angelfire.com/pa4/becketleaves/becketleaveseng6.html).

".. the attractive  tinder of villainy, a lovely place of sin…” From De nugis curialium by Walter Map, who also said that the Young King was handsome and eloquent, " a little lower than the Angels".

To make it brief: he must have looked every inch a king. He certainly was more regal than his father, Henry II, well known for a total disregard for contemporary fashion and displays of royal splendour (clothing included). The Young King must have been taller, too, for at least two chroniclers of the time did not omit to mention it, the above-cited Gervase of Tilbury and Gerald of Wales:

"They [Henry and Richard] were both tall in stature, rather above the middle size. And of commanding aspect”. From The Topography of Ireland (On Henry II and his sons), written by Gerald of Wales c.1188.

As one may suspect, only few images of the Young King survived to our era. And little wonder. We should consider ourselves lucky to have any at all. Let's not forget that Henry lived in the 12th century. There are no surviving images of the contemporary rulers from the less cultured parts of medieval Europe other than seals or coins, e.g. from my native Poland. We treat them as the most precious gifts from the dim and distant past.

Speaking of seals, we do know how Henry's seal looked like, but it should be taken as it is: just a sad reminder of his high, but unfullfilled ambitions, of his dreams of real power and responsiblity that had been thwarted from him by his father. His seal is much telling proof of his real status. The role of a seal was not to portray a ruler as an individual but 'to convey a sense of his or her authority'. Usually a king's seal was two-sided, depicting him enthroned on one side and on horseback with his sword drawn on the other* (Inventing Eleanor). As Matthew Strickland points out, Henry the Young King's limited authority 'was even proclaimed in the unusual design of his seal; not only is it merely single-sided, but it depicts the younger Henry without a sword, a key symbol of authority' (The Upbringing of Henry the Young King, p.194). 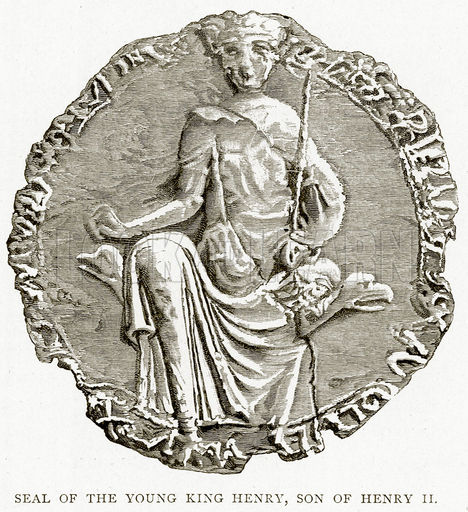 The stained-glass window in Sainte-Pierre Cathedral, Poitiers, could be called the earliest contemporary portrait of Henry the Young King, but just as with seals and tomb effigies, it cannot be truly taken as a realistic depiction of the figures represented in it. It was comissioned by Henry's parents who are shown as donors. The four figures of children are to represent the royal couple's then-surviving sons, Henry, Richard, Geoffrey and John, which places the creation of the window sometime between the birth of the youngest, John, in 1166 and the Great Revolt of Henry the Young King, in which he was supported by his mother and two brothers, Richard and Geoffrey, in 1173. 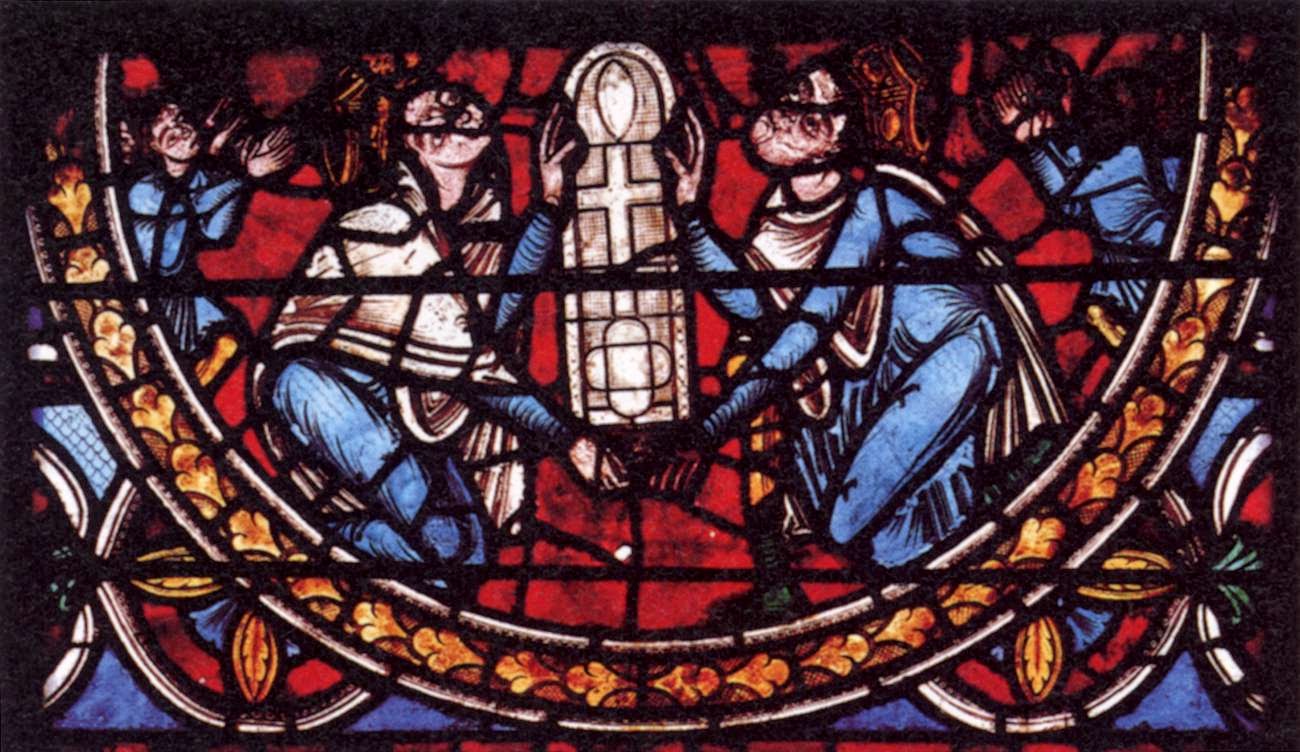 If the historians are in the right there is one more depiction of Henry dating back to his earthly days, and it is the so called Radegonde Mural, discovered by Albert Heron in 1964. Thanks to this remarkable discovery we can admire it today at Chinon, on the wall of the underground chapel of Sainte-Radegonde. We all are familiar with the image of the middle figure commonly identified as Eleanor of Aquitaine, for many of Eleanor books, both biographies and novels, feature it on their covers. 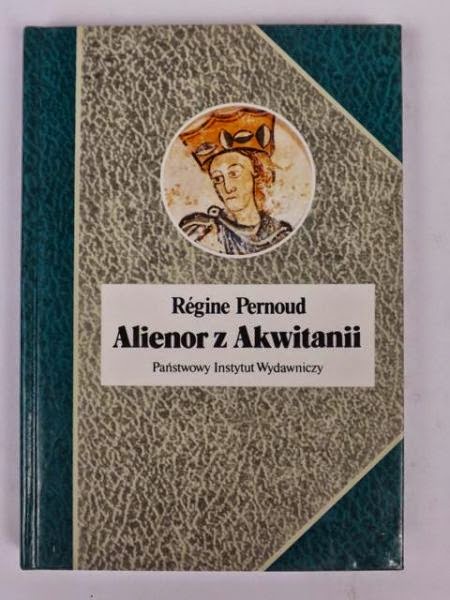 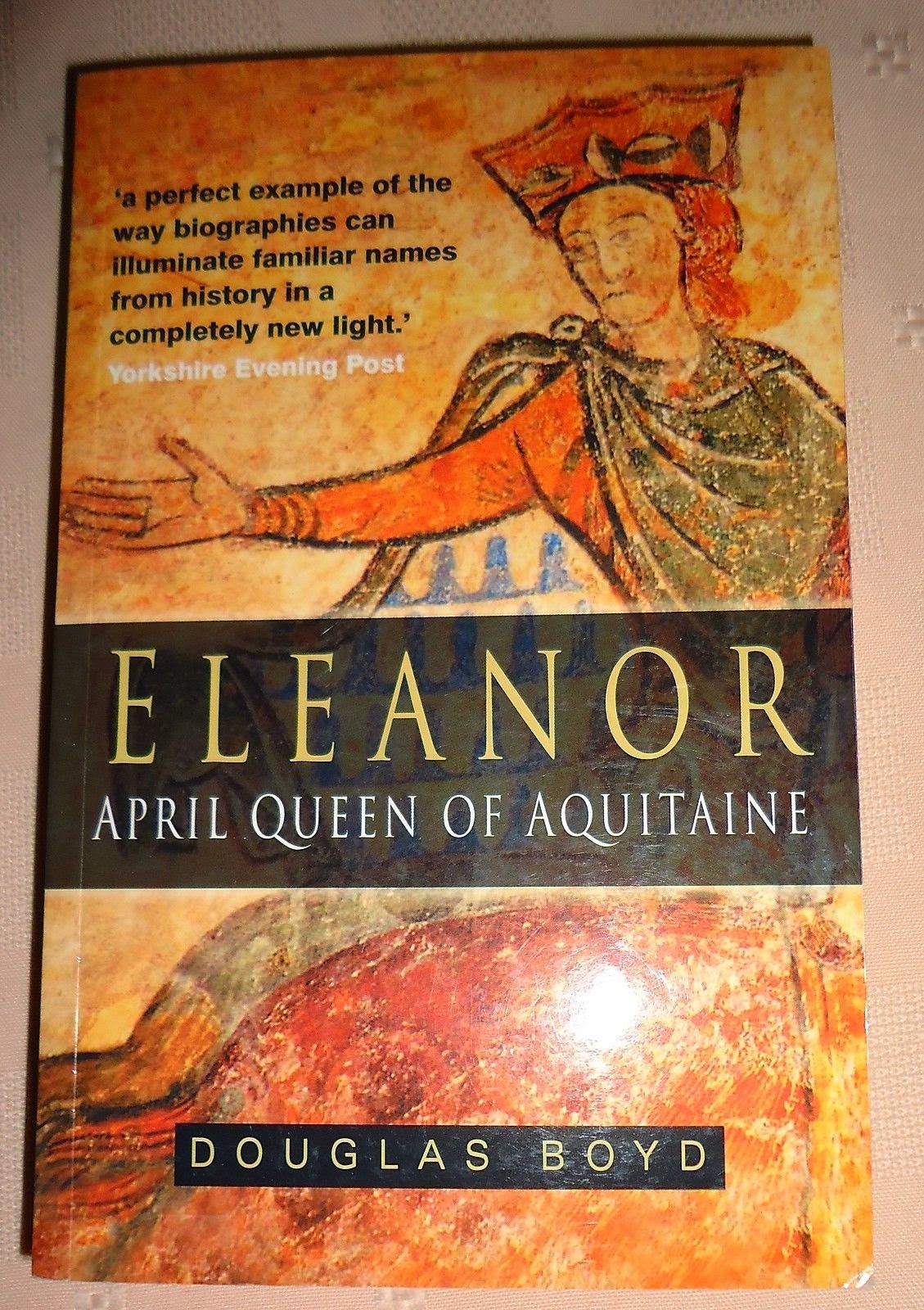 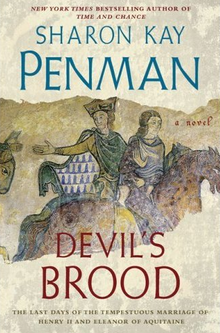 Historians, however, have probed deeper and the recent interpretations of the scene have cast a new light on the identities of the figures depicted in it. As I mentioned above, it has been long believed that the crowned figure in the middle was Henry's mother, Eleanor of Aquitaine. In fact, it might be the Young King himself. As Ursula Nielgen points out, all five figures are males. On closer examination she has found the clothing and hairstyle typical of the male fashion of the day. That is why she identifies the figures as Henry II and his four sons, and the second crowned figure as Henry the Young King not his mother. The two figures wearing caps are Richard and Geoffrey (dukes of Poitou and Brittany), and the rider next to Henry the Young King is his youngest brother, John. For the date of the creation of the painting Nielgen suggests the aftermath of the 1173-74 Revolt when the father and sons were reconciled. This would exclude Eleanor, who was her husband's prisoner at the time and far from being reconciled with him. To sum up, if Ursula Niegel is right, the mural is the earliest surviving contemporary representation of Henry the Young King. You can view a few wonderful photos of the Radegonde treasure here.

Had it survived, Henry's tomb effigy from Rouen Cathedral would have been the second oldest depiction of him after the mural. Unfortunately, it was destroyed in 1736, alongside with those of his brother Richard and his uncle William*, for "some comparatively trivial purpose", namely the then chapter's great desire to "erect more magnificent altar, and to elevate it considerably above the level of the choir. To effect this it was necessary to take up the old pavement, to remove the monuments, and to disturb the soil underneath to the depth of 15 feet. It must be menioned, however, to their credit, that they had great respect to the mortal remains of these illustrious persons, which they replaced in their original positions; and when the new pavement was put down, squares of white marble were inserted over the graves of each, bearing simple and appropriate inscriptions...' (from French Cathedrals). Upon that of Henry one could read:

(Henry would have probably exclaimed: "By the legs of God, I AM Henry, king of the English in my own right. Not just Richard's brother!!! I led an independent life, you know!" ).

Still, we should consider ourselves lucky, for before the tombs were destroyed, Bernard de Montfaucon, a French monk, one of the founders of  modern archeology, had copied them and preserved as engravings. The below drawing comes from Livre du Millénaire de la Normandie (1911, probably after Montfaucon).

Let me note that Richard's tomb was later discovered almost intact (one can only marvel at his proverbial luck which seems to have run out only once, at Chalus). You can read about it here. The author of the letter has won my heart by showing deep concern about the lost tomb of Henry the Young King. 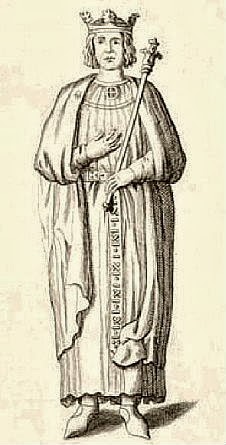 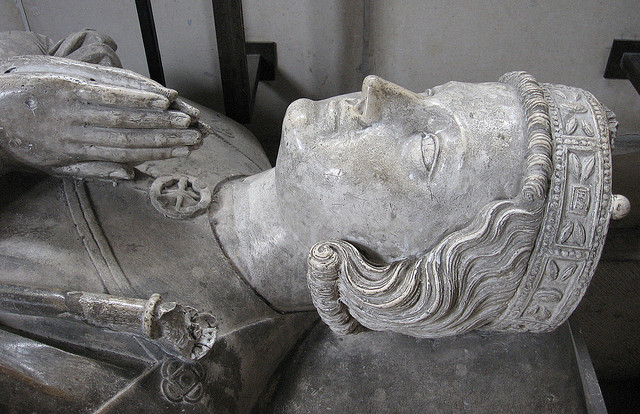 The windows at Chartres and Angers were created to narrate the life of Henry's one time tutor, Thomas Becket, the Archbishop of Canterbury. As I have mentioned in one of my previous posts, Becket, upon his return from exile, wanted to pay respects to the young Henry, residing at Winchester at the time, but the latter refused to see him. It is the scene of Henry's refusal that has been depicted in both the Angers and the Chartres windows. The windows must have been created relatively close to each other: historians suggest c.1204 for the Angers window and 1210–20 for Chartres. 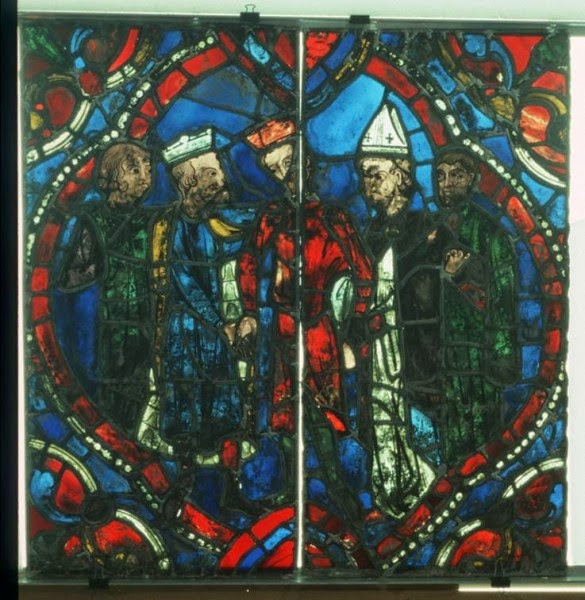 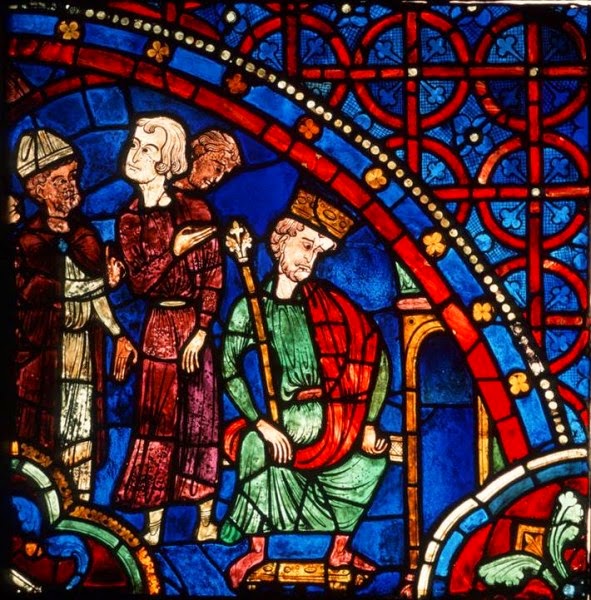 The Becket Leaves is a French-verse history of  the life of Henry's one time tutor, St Thomas Becket, written between c.1220 and c.1240, probably by Matthew Paris. Only a few pages of the illustrated poem have survived and quite miraculously the Young Henry's first coronation has been among the lucky "survivors". 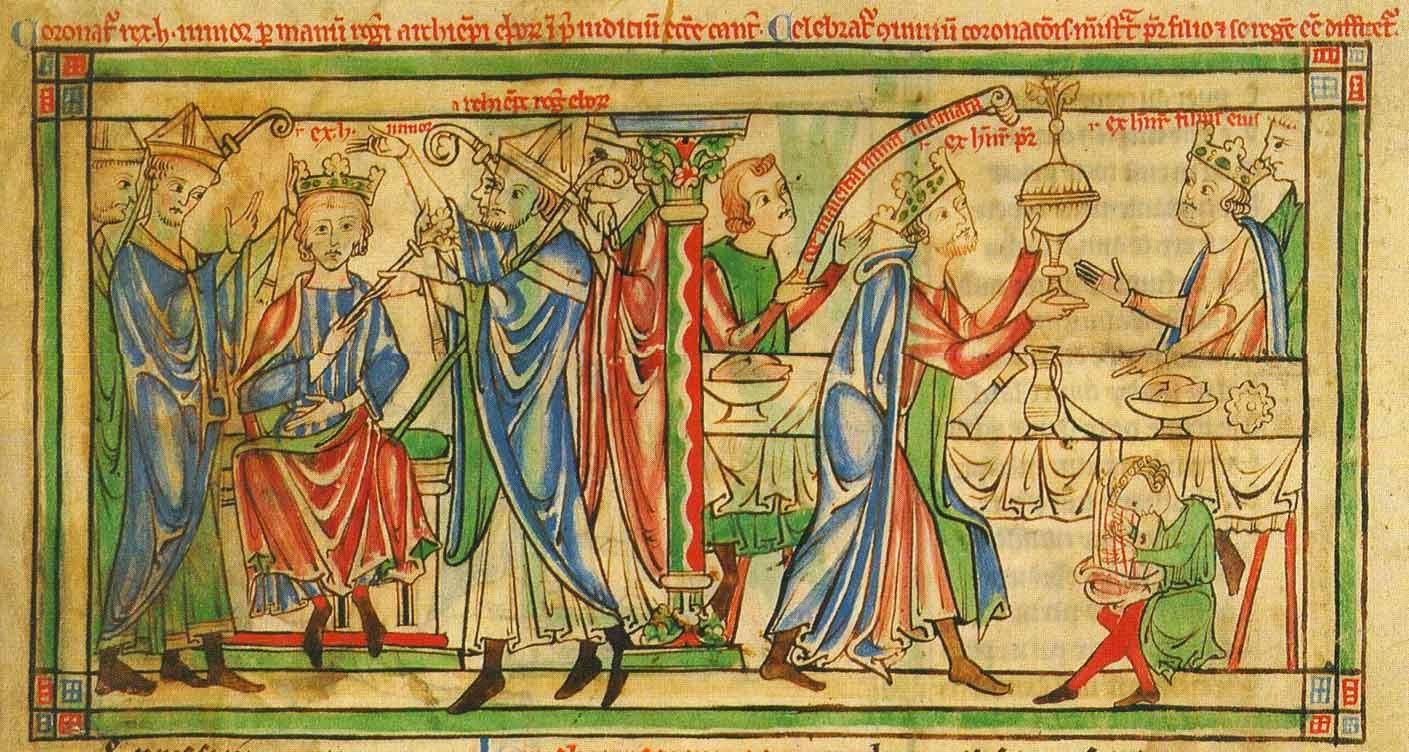 We can see Henry being crowned by Roger of Pont-l’Eveque, Archbishop of York, on the left and served by his father , Henry II, at the coronation banquet on the right (source: Wikipedia).

The 15th century manuscript illumination depicting the coronation of Henry's brother-in-law Philippe Auguste [Philip Augustus] on 1 November 1179. Henry, together with his younger brothers, Richard and Geoffrey, represented the House of Anjou on the occasion. Not only did he hold the crown for young Philippe, but also bedazzled all the present with his retinue and most precious gifts for the new king. The image comes from Grandes Chroniques de France, created c.1455, so three centuries after Henry's death. Jean Fouquet, who painted the minature, did not know how Henry looked like, for how could he. Judging by the illumination, however, he must have read the chroniclers' descriptions of Henry, or perhaps, the Young King's good looks were still remebered at the time. Here is my post about Philippe's coronation and the part Henry played in it. 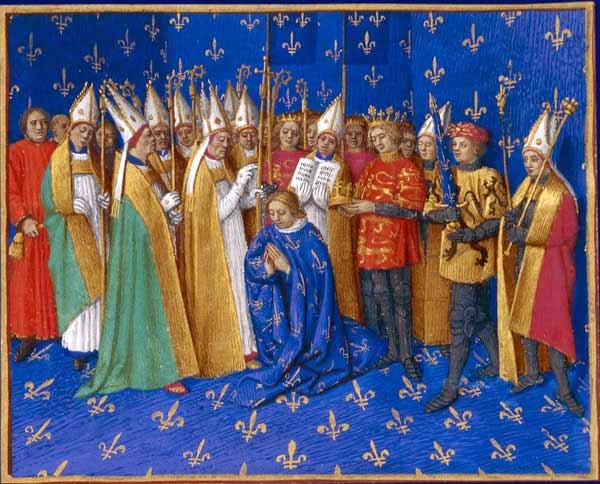 And this is my intentional omission: 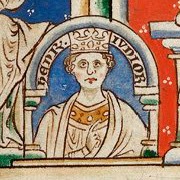 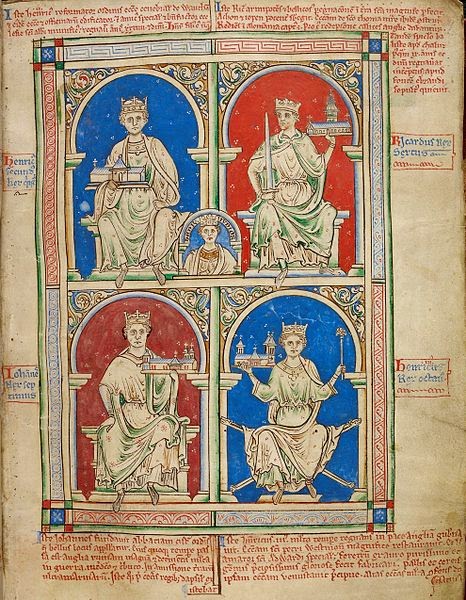 From Historia Anglorum (1250-1259) by Matthew Paris. The portrait of Henry being a part of the illumiantion depicting his father, Henry II, his brothers, Richard I and John, and his nephew Henry III (source: Wikipedia). Don't you think that the Young King looks like a dolt in it? Hence the omission :-) But I have felt obliged to share it with Henry's readers anyway.


* It was to convey two of a king's major roles- as provider of justice and authority and as a war-leader.

** Richard's tomb was near the altar on the left. The tombs of Henry and William were also near the altar, but on the other side. The remains of William (d.1164), the younger brother of Henry II, were not found.

“On the Instruction of a Prince: the Upbringing of Henry, the Young King” by Matthew Strickland in Henry II: New Interpretations. Ed. Christopher Harper-Bill and Nicholas Vincent. Woodbridge: Boydell Press, 2007

The Demon's Brood: A History of the Plantagenet Dynasty by Desmond Seward, Google Books

The Plantagenet Empire 1154-1224 by Martin Aurell, translated from the French by David Crouch, Google Books

French Cathedrals. From Drawings by R. Garland with an Historical and Descriptive Account by B.Winkles, Google Books

Account of a Tour in Normandy by Dawson Turner, Google Books

Observations on the Monumental Effigy of Richard I of England by Albert Way, Google Books

"Proper Behaviour for Knights and Kings: The Hagiography of Matthew Paris, Monk of St Albans" by Cynthia Hahn in The Haskins Society Journal ed. by Robert B. Patterson, Google Books