To Crush Count Richard's Haughty Pride.The History of William Marshal on the War of 1183. Part II

Before he described the sad events surrounding Henry the Young King's death at Martel in June 1183, the author of the History of William Marshal offered some invaluable pieces of information concerning the war of 1183 itself. He omitted to mention the more shameful aspects of Henry's campaign such as incidents before the walls of Limoges or pillaging the abbeys, and concentrated on his relationship with William Marshal. But before he described how William was called back and reunited with his lord - he and the Young King had fallen out over William's alleged affair with Marguerite, the young queen - the author provided valuable glimpses into the "behind the scenes". But let us begin where we ended in Part I of this post, in Normandy, at Henry II's court. A bitter quarrel between the three brothers ensued, with Henry and Geoffrey [of Brittany] on one side and Richard [the Lionheart] on the opposite. 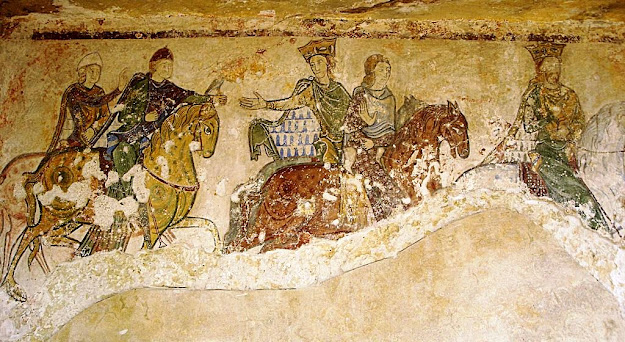 If we are to believe the author of the History the parting was equally bitter, with Henry and Geoffrey leaving their father's court in a rage. The brothers headed for Limoges where they mustered their forces: knights and soldiers, archers and crossbowmen, and mercenaries. The rebellious barons of Aquiatine whom the Young King was allied to came "in great number" to give their suport and "crush Count Richard's haughty pride". This is the History's version of events. In reality Geoffrey was sent by Henry II to Limoges in order to pacify Richard's disgruntled barons. This was the last thing Geoffrey had in mind, though, and soon his father received the diquieting news about his son's transgression. Young Henry offered to go and talk some sense into Geoffrey. Of course this was part of their plan and it worked out. Though their father must have suspected they were up to something. He supported Richard, who found himself in a very difficult position. This was the greatest threat to his rule over the duchy so far.

Henry and Geoffrey may not have expected their father's support for Richard, but now the old king was making his way to Limoges "with furious speed" he was famed for. His sons withdrew inside the castle, where they were consulting and planning their next move. Here the History takes us to the Young King's chamber where he was confering with his chief advisors: his brother Geoffrey, Roger de Gaugy and Geoffrey de Lusignan. The two Geoffreys tried and managed to convince the king to return William Marshal to his royal favour. This scene, in particular, provides food for thought. 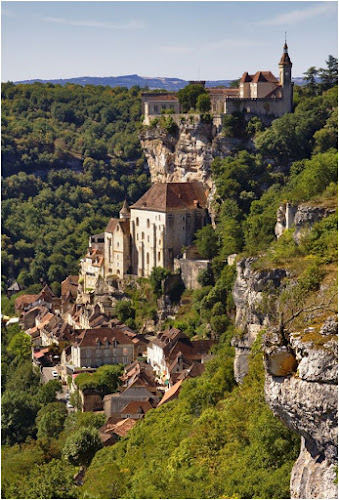 The mood prevailing among Henry and his household has been reflected plus the role the two Geoffreys played in it has been much illuminating, with light shed on Henry and his younger brother Geoffrey's relationship, which must have been cordial. Apparently William Marshal himself must have held Geoffrey of Brittany in high esteem, perhaps due to the role the latter played in bringing him back to court and to the Young King's favour. In the words of the History, Prowess was Geoffrey's watchword. As we remember, William and young Henry had fallen out over the former's alleged love affair with Marguerite, the young queen. According to Geoffrey it was the lying, trecherous and malicious tongues doing. But what's even more interesting, is the attitude of the second Geoffrey, de Lusignan, towards William. The two men must have come to terms eventually otherwise Geoffrey would not be shown in such a good light in the History. There had been a long lasting emnity between William and the de Lusignans, Geoffrey and Guy. Since 1168, to be precise, and the tragic events they all had been involved in. The then young William together with his maternal uncle, Patrick, the earl of Salisbury were escorting Queen Eleanor from castle to castle in Poitou when they were attacked by the de Lusignans. Patrick was killed on the spot, unarmed, struck from behind. William, being an eyewitness to this shameful act fought tooth and nail to avenge his uncle but was wounded and kept in captivity, He never forgave Geoffrey and Guy. It must have been Guy (the future king of Jerusalem) who delivered the fatal blow, for Goeffrey claimed he was innocent. As a result, both brothers were banished by Henry II. Upon his return from exile Geoffrey joined the Young King's mesnie, much to William's distress. That is why it must have come as a surprise when Geoffrey spoke in William's favour at Limoges. If we are to believe the History, this is what he said: 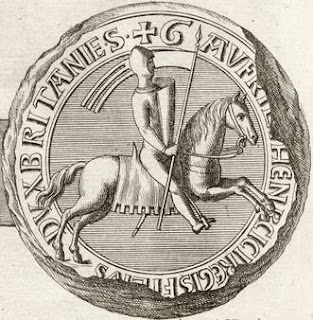 God grant me honour, it was purely the work of men who'd taken against him out of envy. They wouldn't expect me to say this, but upon my soul, I'll defend both him and my lady the queen from the allegation against them - a fiction spawned by envy, treachery and wicked malice. I want to see it disaproved, and I'm ready to do combat and quash this trecherous chargé against the worthiest man in the world! God confound theses traitors of yours! I know the Marshal was never base or false. Though truly, he feels no love towards me, for he suspects me of a wrong of which I'm innocent: I never killed his uncle.

No sooner he spoke than the then seneschal, the instigator of Marshal's downfall whose name the author - perhaps deliberately - does not give, addresed the king, saying he could stay no longer because the Henry II besieged the castle and he himself was his liegeman. That is why he intended to leave the young king and join the old one. The words sparked the immediate response from young Henry and he would have probably killed the traitor, as he called him, had Geoffrey, his brother not stopped him in time. Following his advice Henry decided to get rid of the man, send him away. "So he was cast out in shame."

Soon afterwards Ralph FitzGodfrey, the Chamberlain was sent to bring William Marshal back. Which he did. After many a hardship. William returned just in time, in the hour of greatest need. With the recomendatory letters from the king of France, archbishop of Reims, count of Dreux and count of Blois. Even Henry II did not bear him ill will anymore and let him go back to his son's side. Where he was badly needed. 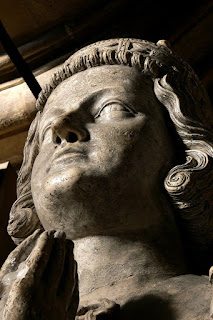 Which brings us to Henry's death bed. The author of the History chose not to mention the plundering of the holy shrines at St Martial, Limoges or Rocamadour which took place shortly before Henry contracted bloody flux and died. Instead, he depicted a very moving farewell scene with Henry asking William to take his crusader cloak to Jerusalem in his stead. The promise William was to fulfill.

Then we learn how the Young King's household knights "wailed and railed against Death" shortly before Death prevailed and their liege lord passed away. Ah, God, what will become of Largesse, Chivalry, Prowess, who all had their home in him? Where will they dwell now? He was their castle, their mansion! They'll never find another to compare!

But it was not over. Not yet. The Young King was to speak one last time and when he did, he expressed the wish to be buried at the church of Notre Dame at Rouen and he asked his knights to seek his father's forgiveness. His last words were: "Now in God's name, remember me!" And we know they did. As well as they fulfilled his dying wishes. But before they could take their lord's body north, they had to face a major obstacle. One Sancho de Savannac, a mercenary demanded substantial sum of money the Young King was to pay him for his service, but never did. He threatened to keep Marshal prisoner until he was paid off. Only William's promise stopped him from doing so. William was respected by everyone and his word was enough to convince Sancho to let him go. Now it was up to William to gain the money and to face the old king. Which he did, telling Henry II about his son's last moments. Then the History provides detailed account how the debt was settled and the king agreed to pay it. He was to say the famous words: 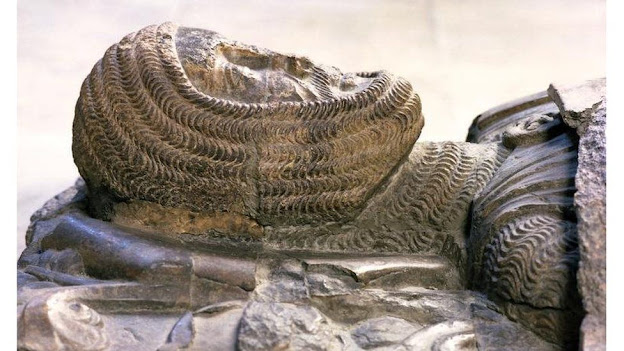 Then the author procedes with the description of the Young King's last journey. With his unexpected burial at Le Mans, where the citizens seized the royal body and buried it in the cathedral to highten the prestige of their city. An later the proper funeral at Rouen. He also mentions what happened to Henry's household knights and how they sought their fortunes at the tournament circuit. Finally, we learn a little bit - but not much - about William's stay in the Holy Land. The History tells us about Henry II's financial support. The king was to give William a hundred Angevin pounds for his pilgrimage. William sailed for England to say farewell to his family and then headed for Syria and was gone for two years. This, in short, is what The History say about the war of 1183 and its immediate aftermath.

The History of William Marshal translated by Nigel Bryant. Woodbrodge, 20016