Over to the anonymous Barnwell chronicler:

The King of the English crossed over to Poitou with his army at the beginning of February and stayed there until September and recovered a large part of that land which Philip, the French king, had confiscated earlier. He had reconciled many great men to himself and many of these he led with him in the army.

In securing Anjou he was successful in preliminary moves, but when it came to capturing the crucial fortress of la Roche au Moine and prospect of a pitched battle loomed ahead, his Poitevin allies refused to fight. John had no choice but to retreat to La Rochelle. Meanwhile, in the north John's nephew Emperor Otto and his younger brother, William Longespee, were waging their campaign. Over to the Barnwell chronicler again:

Ferrand, count of Flanders, after he had been expelled from his province by King Philip of France, sought aid from Otto IV, emperor of the Germans, and King John, and made a treaty with them. Confident of their aid, he returned to Flanders with the intention of taking everything back from the hands of the French king through the power and help of these illustrious men, and especially with the assistence of William, earl of Salisbury, the English king's brother and Renaud, count of Boulogne. These men came to Ferrand's aid together with a large army.

This illustration by Matthew Paris shows the moment of despair, when Hugo de Bouve is forced to flee as his king, Philip, lies momentarily helpless before his final victory.


Between Mortain and Tournai, at the bridge of Bouvines, this army met the French. Three hours of brutal fighting ensued with Philip nearly losing his life. The count of Flanders led the allied left, the Emperor Otto its centre, Henry the Young King's younger half-brother William Longespee, the earl of Salisbury its right. The French right was commanded by the duke of Burgundy, its left by the bishop of Beauvais, and its centre by King Philip himself. The victory went to the French.

… on 27 July, a Saunday, having killed many in the conflict the French king held the palm of victory. In the battle these distinguished fighters were captured: Pluto the German, Ferrand, count of Flanders, William of Salisbury, Renaud of Boloune, the seneschal of Otto and one hundred and fifty other knights of illustrious status.

Otto IV was forced to flee the field. He lost his imperial standard on the way. As for John, for him 'the road from Bouvines to Runnymede was direct, short, and unavoidable’ as Sir James Holt put it. The defeat brought an end to John's efforts to recover his lost lands on the Continent. And because many of the English barons objected to serving in this war campaign in the first place, Bouvines left John vulnerable to their rebellion. Which was to follow. Philip consolidated his hold on Normandy. 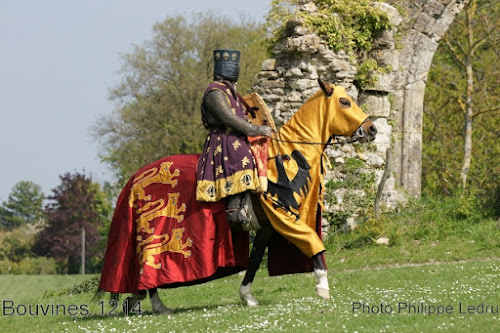 Emperor Otto IV at Bouvines. King John, Henry the Young King and William Longespee' nephew, the son of Henry the Lion, the duke of Saxony and Bavaria, and Matilda, the eldest daughter of Henry II and Eleanor of Aquitaine.

Bartlett Robert, England Under the Norman and Angevin Kings, Oxford 2000.