In the mid 1170s, after his Great Revolt was brought to an end, Henry the Young King learned about a new arrival into the family. His youngest brother entered the world. Born on the wrong side of the blanket, as we would say today, baby William was Henry's half-brother, to be precise. With Henry's mother, Queen Eleanor imprisoned and Rosamund Clifford dead Henry II took young Ida de Tosney for his mistress. Ida was the old king's ward at the time. She came from an aristocratic and well connected family. Her father Roger de Tosney held vast estates in Normandy. Her mother, whom she was named for, came from the powerful Beaumont family. 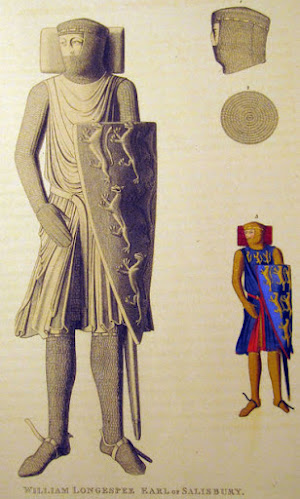 Young William, who was to come down in history as William Longespée, was raised at his father's court, while his mother married Roger Bigod, the earl of Norfolk and had other children with him. William's younger half-brother, Hugh Bigod - the eldest of Ida and Roger's children and heir to the earldom - was to marry the eldest daughter of William Marshal one day, drawing the Bigods and the Marshals together, and thus William himself closer in his mother's family connections.

Whether Henry the Young King, twenty years senior to William, pay his young half-brother any heed, we do not know. He was dead by the time William reached maturity. If they ever had any relationship it must have been admiration a little brother felt for a "big" one, with the Young King a glittering but distant figure. Other brothers, however, provided for young William. His star began to rise with Richard I and was to shine most brightly during the reign of John. In Anglo-Norman society what  mattered was a family. The royals were no exception. When they sought allies, they sought and found them among thier relatives, both close and distant ones. There was a place in that scheme for royal bastrads, as well. They were cared and provided for and then used in their parents' or - as in William's case - in their siblings' policy.
To learn more about William Longespée and his long and distinguished career as both diplomat and military leader read James Turner's article in the Royal Bastards series.
Written by Katarzyna Ogrodnik-Fujcik