The German Nephew: Henry V, Count Palatine of the Rhine

Henry V [Heinrich] (1173-1227), Count-palatine of the Rhine, was the eldest son of Henry the Young King's sister Matilda and her husband Henry the Lion [Heinrich der Lőwe] of the Welf dynasty, duke of Saxony and Bavaria. In 1182, a year after his father lost his imperial fiefs as a result of his clash with Emperor Frederick I Barbarossa, a nine-year-old Heinrich, together with his elder sister Richenza and younger brother Otto [later Otto IV Holy Roman Emperor] accompanied his parents when they went into exile into the lands of Matilda's father, King Henry II of England. 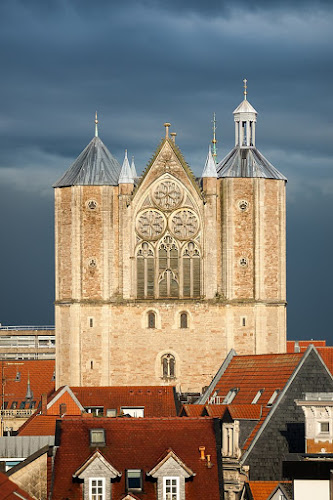 Brunswick Cathedral, Germany. Founded by Heinrich's parents upon his father's return from the Holy Land. Hinrich completed its building, adding St Thomas Beckets to its patron saints. Photo courtesy of Wikimedia Commons
Heinrich must have been an eyewitness to the fierce family quarrel that ensued during the Chrismas court of 1182 at Caen and the clash of wills between his uncles, Henry the Young King and Richard, Duke of Aquitaine [later Richard I the Lionheart], the events that led to the war of 1183 and to the Young King's death. Heinrich and his family spent three years in his granfather's domains. In 1185 he was the only child of the ducal couple to return to Saxony with his father. Richenza, Otto and little William (b. in Winchester, England, in 1184) remained behind at the Angevin court. Little wonder that 1190 saw him the key figure alongside his father in Saxony.
In February he was sent as his father's representative to his uncle Richard I at La Reole (Gascony) to discuss the Saxon affairs and to ask for the latter's assistance. Similarly when elder Heinrich negotiated agreement with Barbarossa's son and successor Emperor Heinrich VI, he offered his son Heinrich (alongside with his other son Lothar) as hostage.  In 1194 Heinrich married Agnes, the daughter and heiress of the Staufen count-palatine Conrad of the Rhine. A year later both his father and his father-in-law died and Heinrich inherited not only the most important rights and properties in Saxony, including the principal residence of Brunswick, but also became count-palatine of the Rhine. During the subsequent years, however, he focused mainly on securing his Saxon inheritance.
In 1198 he might have been elected king and emperor instead of his younger brother Otto, the only emperor of the Welfen dynasty, if he had not been crusading in the Holy Land at the time - he left early in 1197 only to return in the autumn of 1198. After his return he found himself entangled in the civil war that yet again engulfed the German kingdom. Initially he supported his brother Otto and was "always in all matters the better part of the king's council", as was reported in a letter to Pope Innocent III in 1201. In 1202 he agreed to create a lordship for Otto out of his Saxon lands, even acknowledging his younger brother's control over the Welf's chief town of Brunswick (the so-callled Contract of Paderborn). Otto spent most of his youth in the Angevin domains inheriting a small portion of his patrimony, that is why he badly needed the stable territorial foundation for his kingship. Heinrich was ready to provide him with it.
1204, however, saw him switching sides and pledging loyalty to his brother's opponent, the Staufen king, Philip of Swabia, the youngest son of Frederick Barbarossa. As the author of Chronica regia Colonienisis relates, "the unfaithful count-palatine, who was at his brother's side, abandoned him and went over to Philip, corrupted by his money and the promise of the duchy of Saxony". The reason for this defection must have been Heinrich's weakened position in Saxony after the afore-mentioned partition. Arnold of Lübeck, however, gives a little bit different account of what happened. According to him Heinrich was warned by Philip of Swabia that he was to loose the title of the palatine of the Rhine unless he joined the Staufen camp. Heinrich sought compensation if that were to happen and asked Otto to give him back the castles of Brunswick and Lichtenberg. Otto was to refuse flatly, thus pushing the elder brother into defection. Although Heinrich never actively plotted against Otto, he did something shocking by the standards of the day, for few noblemen of the Staufen period sided with another lord against his own brother. Pope Innocent III, at the time Otto's active supporter, wrote to Heinrich, hinting that the latter was even risking excommunication, but Heinrich - as it seemed - did not care.
The brothers were reconciled in 1208, after Philip of Swabia's assassination. They were to maintain close ties with one another until Otto's death in 1218. Heinrich died nine years later, having set up his nephew Otto "the Child", the son of his brother William of Winchester, as heir of the entire Welfen domains.
Written by Katarzyna Ogrodnik-Fujcik
Literature:
Lyon Jonathan, Princely Brothers and Sisters: the Sibling Bond in German Politics 1100-1250, Ithaca 2013.