The Victors of Verneuil

9 August 1173. The first (the second being the siege of exactly a year later) of the two most important sieges of the Great Revolt came to an end. After a month siege the key border Norman town of surrendered do Louis VII and Henry the Young King. The event left Louis, who was in command, with a stain on his honour. Let me quote the detailed account of what had happened shortly before from the Annals of Roger of Howden:

‘… Louis, king of the Franks, and the king of , the son laid siege to Verneuil, but Hugh de Lacy and Hugh de Beauchamp, who were the constables thereof, defended the town… boldly and with resolute spirit. In consequence of this, the king of , after remaining there a whole month, with difficulty took a small portion of the town on the side where the engines of war had been planted.’ 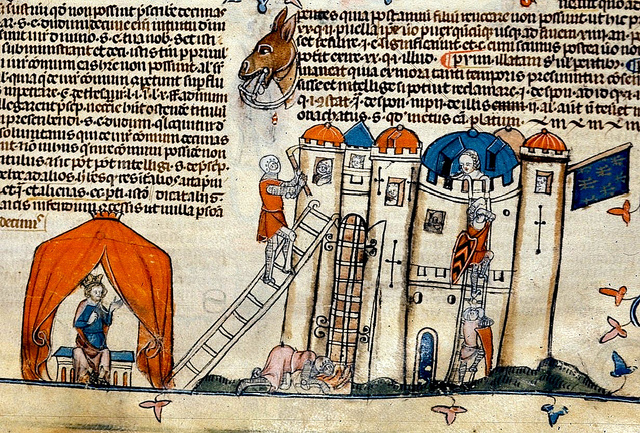 However, the burgers in the Great Burgh [Verneuil, besides the castle, consisted of, according to Ralph of Diceto, seven burghs each separated from the other by a moat and walls] seeing that their food supplies and necessaries were short and insufficient made a truce for three days with the French king. According to it they could ask for Henry II’s help, but if he failed to reach the town on the appointed day, they would surrender their burgh to Louis on the vigil of Saint Laurence [‘whom he was accustomed especially and devoutly to venerate’], 9 August. Upon the agreement they gave hostages to the king of and were promised that if they surrendered at the appointed time, their hostages would be restored to them ‘free and unmolested’. The burghers sent envoys to Henry II, but although the king, marching through Conches and destroying the rebel , managed to reach Verneuil on time, Louis violated the truce.

‘On hearing of this, the king of England collected as large an army as he possibly could from Normandy and the rest of his dominions [and] … for the purpose of engaging with the king of , proceeded to a high hill, near Verneuil, with the whole of his army, and drew up his troops in order of battle. This too was the peremptory day upon which that portion of Verneuil was to be surrendered if it did not obtain succour. Upon this, Louis, king of the Franks, sent William, archbishop of Sens, earl Henry, and earl Theobald to the king of England, the father, who appointed an interview to be held between them on the morrow, and the king of England, to his misfortune, placed confidence in them; for he was deceived. For on the morrow the king of neither came to the interview, nor yet sent any messenger. On this, the king of England sent out spies to observe the position of the king of France and his army; but while the spies were delying their return, that portion of Verneuil was surrendered [apparently the citizens did not know of Henry II’s arrival] to the king of France to which he had laid siege. However, he did not dare retain it in his hands, having transgressed the oath which he had made to the burghers. For he neither restored to them their hostages, nor preserved the peace as he had promised; but, entering the town, made the burghers prisoners, carried off their property, set fire to the Burgh, and then, taking to flight, carried away with him the burghers before-mentioned to France’.

It is unclear why Henry the Young King’s father-in-law acted this way. We will never know whether his stratagem was premeditated or was just a panicked response to Henry II’s unexpectedly quick arrival. Knowing Louis’s character and the ups and downs of his reign the latter explanation seems more probable. We will also never know what role the Young King played in the events. Judging by the chronicler’s words- and it was merely a mention- he did not have much to say. We must remember that he was only eighteen at the time, too young and inexperienced to be counted with. Just a puppet in the hands of his mighty allies.

Upon realizing Louis’s duplicity Henry II gave pursuit, killed many, and ravaged the French camp, taking much booty. Let me sum up yet one more time in Roger of Howden’s words:
‘In order that these events may be kept in memory, it is as well to know that this flight of the king of France took place on the fifth day of the week, upon the vigil of St Lawrence, to the praise and glory of Jesus Christ, who by punishing the crime of perfidy so speedily avenged the indignity done to his martyr’.

War and Chivalry. The Conduct and Perception of War in and , 1066-1217 by Matthew Strickland