Today I will discuss briefly Henry's brothers and sisters, including his half-sisters and natural brothers. Eleanor of Aquitaine (1124-1204) and Henry II (1133-1189) had eight children together, seven of whom reached maturity. Moreover, Eleanor had two daughters by her first husband Louis VII of France (1120-1180), Marie (b.1145) and Alix (b.1151). Additionally Henry II fathered a few children born out of wedlock.

Henry the Young King’s eldest brother was William (1153-1156). He was the only child of Eleanor and Henry who failed to survive infancy. Two years older than Henry, he died in his third year and was buried at Reading Abbey, his great-grandfather, Henry I’s resting place. Upon his death, Henry (our Henry) became his father’s heir.

Richard (1157-1199), was Henry’s younger brother, who succeeded their father in 1189. He is most remembered as a crusader king, champion of Christendom, brilliant military commander and warrior. Formally recognised as the Duke of Aquitaine in 1172, a year later he allied with his brothers, Henry and Geoffrey in a rebellion against their father. Ten years later he faced a coalition of his unruly barons led by the very same brothers. The rebels were supported by King of France, Duke of Burgundy and Count of Toulouse. Richard was forced to turn to his father for help. Henry II hastened to his rescue, and they emerged victorious mostly due to the Young King’s unexpected death. In 1189 the father and the son were again at war, this time standing on the opposite sides. Henry’s reluctance to appoint Richard as his heir lead the duke to seek support of the young King of France. This time it was Richard who won, mainly due to his father's death (Henry died in the course of the campaign in the castle of Chinion, on 6 July) the passing that marked the beginning of Richard’s reign. Shortly after his coronation, Richard fulfilled his dream and lead his army to the Holy Land. He won his name, fame, friends and enemies in the course of what was to become the Third Crusade.

Geoffrey (1158-1186), three years younger than the Young King, was the third surviving son of Henry II and Eleanor of Aquitaine. He became Duke of Brittany through his marriage to Constance, Conan of Brittany’s heiress, in 1181. In 1173 he allied with Henry the Young King and Richard Duke of Aquitaine in a rebellion against their father. In 1183 he supported Henry the Young King against Richard and Henry II. After his eldest brother’s unexpected death he submitted to his father. A year later, in 1184, Geoffrey together with his wife, Constance, founded a chaplaincy at the cathedral of Rouen ‘for the soul of his late brother, the young king Henry, with a rent of 20 l. per annum from his mills at Guingamp’. Two years later he died of the injuries he received in the tournament accident. As Duke of Brittany Geoffrey proved to be a capable administrator and shrewd ruler. The troubadour Bertran de Born, who new all three English princes and held Geoffrey in high esteem expressed his admiration in one of his poems: “If only Geoffrey, noble duke of Brittany/ Had been the eldest of the English princes…”

Henry’s youngest brother was John (1166-1216). There was an eleven-year gap between Henry and John. In 1173 the matter of John's inheritance (or rather the lack of it) led Henry to rebellion against their father. John's titles were: count of Mortain, king of Ireland, and since 1199 king of England. Although he showed the administrative and military skills, his reign proved to be disastrous. Not only had he lost much of his father’s lands on the Continent (by 1206 Normandy, Anjou, Maine and much of Poitou had been lost) but had reduced his own realm to civil war [First Barons War (1215-1217)] which almost ended up with a French king on the English throne. By signing the Magna Carta in 1215, John became the first English sovereign to accept specified restrictions to his power. 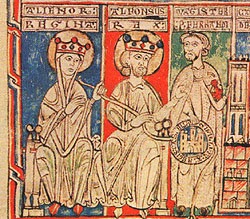 Henry's sister Eleanor and her husband Alfonso VIII of Castile

Matilda (1156-1189) was Henry II and Eleanor of Aquitaine’s eldest daughter, one year younger than her brother Henry. In 1168 she became the second wife of Henry the Lion, duke of Saxony and Bavaria. He was twenty-seven years her senior. During her husband’s absences, such as his pilgrimage to the Holy Land in 1172-73, despite her youth, Matilda often administered his vast lands. In the late 1170s, Duke Henry and the Emperor Frederick {Barbarossa] quarreled and in 1182 the duke, having been declared an outlaw, was forced to seek refuge at his father-in-law’s court. Matilda and some of their children accompanied him. They spent three years there before they were able to return to Saxony. Unfortunately, they were exiled again in 1188. Matilda died at Brunswick, in Germany, in 1189, aged 33. She and Henry had six children. One of their sons [Otto] became Holy Roman Emperor.

Henry’s sister, Eleanor (Leonora) was the sixth child and second daughter of Henry II and Eleanor of Aquitaine. In September 1170 she married Alfonso VIII, King of Castile, Toledo and Extremadura. The marriage was arranged to secure the southern border of her father’s continental domains, with Gascony offered as her dowry. Of all Henry’s sisters, Leonora enjoyed the greatest political influence. She is reported to be almost as powerful as her husband. In his will Alfonso expressed a wish that she was to rule alongside their son in the event of his death. Apart from the constant threat from the Almohads, Alfonso faced the coalition of the Christian rulers, namely the kings of Aragon, Leon, and Portugal, who instead of collaborating against Saracens were preparing to open hostilities against the king of Castile, a ruler whom they accused of the ambition to dominate them all. It was only due to Pope Celestine III’s intervention that the king of Castile and Leon were persuaded to make peace in 1194 and it was Leonora who came up with the project that would cement the new alliance. She persuaded her husband to marry their daughter Berenguela to the king of Leon. When Alfonso VIII died on 5 October 1214, Leonora was heartbroken. She took sick and died shortly after him. They were both buried at Las Huelgas Abbey, the royal abbey which had been founded in 1187 at the request of Leonora (who took with her to Castile the distinctive Angevin style of building), and where their daughter Constance was the abbess. Their daughter Blanca married Louis [later Louis VIII] of France, became Queen and mother of Louis IX.

Henry’s youngest sister was Joan (1165-1199). In 1177 she was married to William, king of Naples and Sicily. After his death, in 1189. she was imprisoned by her husband’s successor, Tancred and held in captivity for several months. It was Joan’s brother Richard, king of England, who came to her rescue, ensuring her release and return of the dowry paid to William on her marriage. She sailed for the Holy Land together with Richard and his newly wedded bride, Berengaria of Navarre In 1196 she took Raymond of Toulouse as her second husband. In 1199, heavily pregnant, she fled to her mother’s court in order to escape an uprising by Raymond’s nobles. She died in childbirth on 4 September at Fontevrault Abbey, her father’s resting place. Joanna had four children, one with William, but the boy failed to survive infancy, and three with Raymond. One son, also named Raymond, succeeded his father as count of Toulouse.

Marie (1145-1198), Countess of Champagne for over thirty years, today best remembered for being Eleanor of Aquitaine’s eldest daughter and because of her associations with Chretien de Troyes. Under her and her husband, Henry the Liberal’s (1127-81) patronage the court of Champagne and its literature flowered. In the count’s eighteen-month absence (June 1179- February 1181) Marie ruled the county in his name, the role she was later to assume again upon her husband’s death in 1181, this time as a regent (from March 1181 to May 1187) for her eldest son Henry and again in 1190 upon Henry’s departure for the Holy Land . She proved to be skilled administrator and politician. There is evidence she was close to her half-brothers, Richard and Geoffrey. With the former she shared Adam of Perseigne as confessor, for the latter- after his untimely death in 1186- she dedicated an altar in Paris. She also entertained her half-sister, Marguerite at the Christmas court of 1184. As for her relationship with Henry the Young King, we can only guess. The two certainly met on 11 April 1182 at La Grange St Arnoult, between Senlis and Crepy, at the conference held to discuss the Vermandois succession, so we can safely assume that they must have met also on different occasions, too.

Alix (1151-1197/98) Generally very little is known of the younger of Henry's half-sisters. The daughter of Eleanor of Aquitaine and Louis VII of France, she became the countess of Blois upon marrying Theobald (1130-91), the younger brother of Marie's husband, Henry of Champagne, in 1164. Alix never really knew her mother. In 1152, when they were separated after her parents' marriage was decalared null and void, she was one year old. We can only speculate about her relations with her half-siblings, which were probably reduced to the great social meetings at the French court (such as the coronation of Philip [later Augustus] in November 1179).

Geoffrey (c.1152-1212)- Henry’s half-brother, styled "filius regis Henrici naturalis", the eldest illegitimate son of Henry II; played a prominent part in the supression of the Great Revolt of 1173-74 in England. Since 1175 Bishop-elect of Lincoln (resigned the office in 1182), since 1181 Chancellor of England and since 1189 Archbishop of York. From the above we can assume that Henry had no love for his eldest natural brother, and vice-versa. In his study Archbishop Geoffrey Plantagenet and the Chapter of York, D.L Douie put it this way: “Geoffrey was certainly his worst enemy and a modern psychologist would probably attribute the imperious and overbearing temperament which made it impossible for him to remain on good terms with his half-brothers, or anyone with whom he had to work, particularly those who had once been his opponents, to his difficult heredity, the misfortune of his birth, his early environment and his being forced into a profession for which he had no inclination” (both Gerald of Wales and Jordan Fantosme praise his military prowess).


William Longespée, was Henry II's illegitimate son by Ida de Tosny. At the time of his birth (c.1176) Henry the Young King was a mature man. When William was seven, Henry was already dead. I doubt that the younger brother (William was twenty-one years Henry's junior) born out of wedlock mattered a lot to the Young King, but Longespée, a skilled knight and battle commander, was a colourful figure in his own right. In 1196 his half brother Richard married him to the great heiress, Ela of Salisbury, thus making him the 3rd Earl of Salisbury. During his half brother John's reign, William was one of the few who remained loyal to the king.