I have just returned from the seashore, so two short notes only:

Firstly, 23 August 1169: rare occasion when we know our Henry's exact whereabouts. That day he was at Domfront, hunting with his father, when the papal legates, Gratian and Vivian, arrived in the town. They had come to reconcile Henry II with the exiled Archbishop of Canterbury, Thomas Becket. As William fitz Stephen reported in his biography of Becket, the elder king returned late from hunting and paid a visit to the curial officials at their lodgings. While they were exchanging compliments, the king's son (our Henry) took centre stage arriving with his party, all blowing their horns and bringing the stag they had killed as a present to the envoys. John Guy in his biography of Becket calls it "a carefully staged act of deliberate provocation". The puppeteer who masterminded the scene must have been Henry II, of course, for I doubt that his fourteen-year-old son could come up with the idea like that. The time would show that Henry's father would not hesitate to employ various methods of beguiling the legates into finding in his favour. The stag scene was just the beginning of a cat and mouse game he would play. 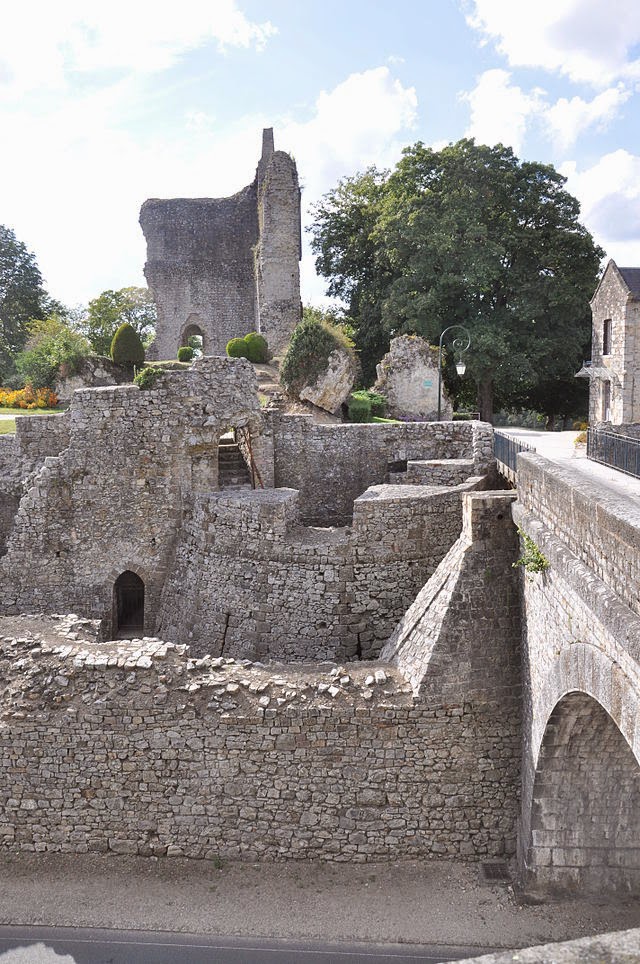 The ruins of the Domfront Castle (source: Wikipedia).
Henry's younger sister, Eleanor, was born here in 1161.

Secondly, my friend, Richard, who is lucky enough to live in Houston, Texas, could go and see a copy of Magna Carta which was on display at the Houston Museum of Natural Science for six months of 2014. Richard seized the opportunity- I would be surprised if he didn't- and here they are... his impressions and photos. You can read about the exhibition here. Poor King John... must be spinning in his grave. That accursed document is conquering the world again:-)

Note: Guess who I spotted on the genealogy chart. Needless to say, I am happy he hasn't been forgotten this time :-)