Henry, Richard and Geoffrey: "Three Sons Bearing Witness to The Fruitfulness of Their Mother"

To celebrate the birthdays of Henry the Young King's younger brothers, Richard and Geoffrey, who were born respectively on 8 September 1157 and 23 September 1158, I have prepared something special. With Ms Sharon Kay Penman's kind permission I would like to share one of my favourite scenes from her bestselling novel Devil's Brood, featuring the three Angevin princes. Their mother, Queen Eleanor, the duchess of Aquitaine in her own right, is kept in close confinement by her husband for the part she played in the Great Revolt of 1173-74, King Henry is pondering the annulment of their marriage, their three oldest sons meet to discuss their mother's and their own future. They come as a united band of brothers this time, just as they are to come in 1181 as the allies of the young Philippe Capet against Philip of Flanders. As Ralph Turner points out in his biography of Eleanor of Aquitaine '...one fact that stands out is the devotion to Eleanor demonstrated by her sons in their adult lives, and it testifies that their experience of her love was more powerful than their father's fitful affection. Clearly the queen had cemented  solid ties of affection with them at some point, whether during their infancy or adolescence...' (p.145) 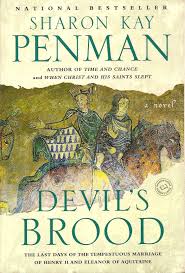 The tavern was located in Goldstret in the goldsmiths' quarter, close by St Clement's Church. Richard had been waiting long enough for his simmering impatience to reach boiling point. He was fidgeting restlessly, drumming his fingers on the scarred, wax-splattered table, waving away a serving maid who'd approached to see if he wanted more wine. Finally the door was shoved open and his brothers swaggered in. Geoffrey was accompanied only by a squire, but Hal had his usual entourage of household knights, and they made such a noisy entrance that all heads turned in their direction.
'What took you so long?' Richard demanded as soon as they approached his table. 'I told you by Compline!'
'Blame Sir Bountiful here,' Geoffrey said, pointing his thumb at Hal. 'He had to stop and give alms to every beggar within a half-mile of the castle, even chasing one across the street to press coins upon him.'
'Charity is a virtue.' Hal responded, jostling Geoffrey good-naturedly, 'but then you'd not know much about virtues, would you?'
'Sit down.' Richard said quickly, before Geoffrey could retort in kind. 'We need to talk.' Hal's knights were milling about nearby, and he added, 'Alone', with a pointed glance towards other men.
Hal dismissed them with an airy 'You heard my little brother. Go off and debauch yourselves. I'll pay for your wine, but not for your whores. There you're on your own.' As they grinned and obeyed, he looked around at the other tavern patrons and said, 'Ah, why not? I'll buy drinks for everyone!'
His generosity won him enthusiastic cheers from all but his brothers and the tavern keeper. Richard saw Hal's magnanimous gesture as shameless grandstanding, and Geoffrey laughed out loud at the look of horror on the tavern owner's face. Pulling up a stool to the table, he said, "The poor sot knows he has a better chance of sprouting wings than collecting so much as a farthing.'
'That is not so.' Hal protested. 'I always pay my debts... eventually.' He and Geoffrey both laughed, and looked vexed when Richard waved the serving maid away again.
'I did not ask you here to drink this swill. We need to talk about Fontevrault Abbey. Maman says that-"
'I already know all about it.' Hal interrupted, with a hint of smugness. 'Papa told me last night.'
'Well, no one bothered to enlighten me,' Geoffrey said testily, 'so suppose one of you lets me in on the secret.'
Richard looked around to make sure the other customers had gone back to their drinking and gambling. 'He wants Maman to agree to an annulment and then retire to Fontevrault Abbey - as an abbess.'
'As bribes go, that is not a bad one,' Geoffrey allowed, and Hal grinned, saying that was his thinking, too.
Richard glared at his brothers. 'She does not want to enter a nunnery!'
Hal shrugged. 'Is she sure of that? It is a generous offer, would give her far more influence than she is enjoying these days. Maman could make of it what she wanted. We're not talking about life as a recluse or an anchoress, for pity's sake. She's to be abbess of Fontevrault, and there are queens who might well envy that.'
'Is your hearing faulty? I said she does not want to do it, Hal!'
Hal returned Richard's scowl in full measure, and Geoffrey could see another of their squabbles brewing. Before Hal could respond, he said sharply, 'Enough!'
They looked at him in surprise, and he glanced over his shoulder to see if they'd attracted attention. 'As usual, Hal, you see only what is right in front of your nose. As for you, Richard, even when you're right, you're right for all the wrong reasons. Neither one of you has fully considered the consequences of their annulment.'
Temporarily united in their irritation with Geoffrey, they launched a joint attack, Hal insisting that he understood the situation quite well and Richard wanting to know what he meant by the 'wrong reasons'.
'Keep your voices down,' Geoffrey warned. 'Tell me this. How old is Papa?'
'I do not know,' Richard said snappishly. 'Forty-two?'
'No, forty-three,' Hal corrected, remembering Chinon and his his father's March birthday. 'What of it?'
'To us, that seems as old as God. But he is not. He could easily wed again and have sons with his new queen. Think about it for a moment.'
Hal was already shaking his head. 'He would never disinherit me!'
Richard did not look so sure. 'You truly think we could be put at risk, Geoff?'
'I do not know,' Geoffrey admitted. 'But I am not willing to take that chance. Are you? Look how he has begun to dote upon Johnny, even giving him the earldom of his uncle Rainald. I am just saying that if he had a few more sons, we could become superfluous. At the very least, it would give him a formidable club to hold over our heads. Now if you both have utter faith in his good will, there is no cause for concern. So... do you?'
Niether Hal nor Richard answered him, but words were not needed. They regarded one another in silence, in a rare moment of mutual understanding and total accord.


Read Devil's Brood to learn what followed. Of course it is the author's interpretation of the events that took place in the spring of 1176 at Winchester, but I find it quite convincing :-)