Saving the Young King. How William Marshal and William de Préaux Came to His Aid at Lagny

"Between Rouen and Le Mans there were no five finer brothers (or even as good) - and that includes kings and counts…" wrote the author of the History of William Marshal about the de Préaux brothers: John, Peter, William, Roger and Enguerrand. The sons of a minor baron from near Rouen they entered the Young King's service and supported him in the Great Revolt of 1173-74. Upon the Young King's passing they became the knights at his father's court and later loyal members of Richard I's mesnie. They accompanied the king on the crusade, during which the second brother, Peter, acted as the king's standard-bearer, the third brother, Roger, acted as the king's steward in the early stages and the fourth, William, fell into Saracen hands to save the king from capture. He was ransomed by Richard himself shortly before the end of the expedition, ten Muslim prisoners offered in return for his release. The youngest brother Enguerrand was closely associated with John before the latter became king and with all probability did not take part in the Third Crusade. Records did not mention his participation. 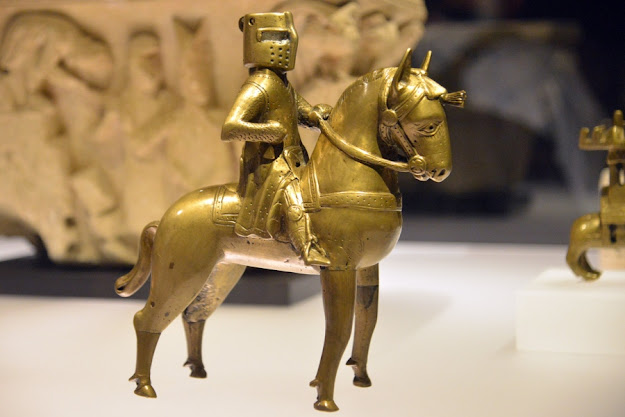 Before William de Préaux came to Richard I's rescue in the Outremer, he had happened to rescue his elder brother, the Young King from utter humiliation in France. This took place in 1179 at the great tournament organized at Lagny-sur-Marne in celebration of Philip Augustus coronation.

The author of the History of William Marshal described in vivid detail what befell the Young King that day and how two Williams, Marshal and de Préaux, came to his aid.

(...) besides the Young King there were no fewer than nineteen counts at this tournament, not to mention the duke of Burgundy; in short, it was reckoned there were more than three thousand knights at Lagny in the company of either king or count (…) There were so many different banners unfurled that they couldn't be distinguished well enough to describe them in any detail. The plain was seething, completely filled - there was not an inch of empty ground. And then the two sides charged.

There was nothing restrained about the clash: the noise was deafening! All were bent on landing mighty blows; what a shattering of lances you'd have heard (…) In the heaving throng that filled the plain the companies bawled their battle cries (…) There were fearsome clashes all over the field and many great feats of arms that day; it was a splendid tournament indeed, even before the king and count [Geoffrey of Brittany] entered the fray. 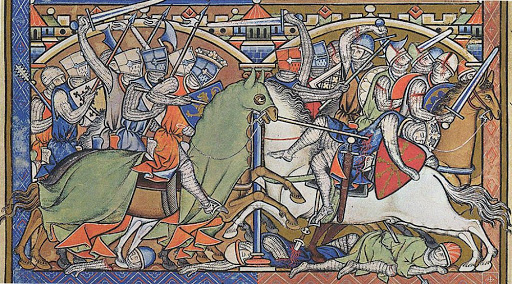 But then you'd seen the earth tremble as the king cried: 'This is getting tiresome! I'll not wait a moment longer! Charge!'

And he thrust in his spurs; but the count cannily held back, not joining the fray till he saw the time was right - though then he charged at once. The king's men surged froward so audaciously that they left the king behind, and with such ferocity that their opponents took to flight - and it was a shambles: they found themselves driven among vines and ditches, floundering over the thick-laid vinestocks where horses fell by the dozen, and thrown riders were dreadfully trampled, mangled, battered. Now Count Geoffrey led a furious chargé with his company and soon the whole batallion who should have been with the king were far ahead, in hot persuit of the fleeing foe (…) leaving the king stranded, and mightily frustrated at being so, with the enemy out of his reach. But then he spotted a band of them away to his right - at least forty knights there must have been. Clutching his lance he charged at them and smashed into their midst. with such force that his lance shattered like glass, and he was overwhelemd by numbers and they seized him by the reins.  They were swarming around on every side, and he found himself entirely alone except for the Marshal, who was right behind - he always stayed close to the king in any combat. There he was, near at hand, along with William de Preaux, who'd just been made a prisoner that dau and withdrawn from the contest [presumabely he had been captured and released on parole]. He had a hauberk hidden under his surcoat and an iron cup on his head, but otherwise unarmed. The enemy had the Young King in their clutches and were bent on tearing the helm from his head. The Marshal charged and plunged among them, striking out to right and left; he showed them what he was made of! Then he seized the headstall of the king's horse and hauled and heaved till he dragged it off, along with the bridle, and William de Preaux grabbed the horse by the neck and did all he could to escape from the fray while their enemies pressed about him, trying to keep hold of the king. They aimed blow after blow at de Preaux; the king deftly covered him with his shield, warding off the blows and protecting him from harm; but they'd managed to rip the helm from the king's head, much to his vexation…."

In short, a group of Flemish knights tried to capture the king, by surrounding him and seizing his bridle (according to the custom). The only way Marshal and de Préaux could save him was to pull the bridle and harness off the king's destrier, so that the attackers had nothing left to hold on to and thus could not restrain him. De Preaux led the king's horse away by putting his arm around the beast's neck while Henry with his shield protected him from blows. The two Williams saved the Young King from the utter humiliation. Later Henry was to say that no single knight was never seen to deal the finer blows than the Marshal did that day. He must have been grateful to William de Preaux, too.

In 1204 Peter de Preaux commanded the garrison  of Rouen for Henry and Richard's younger brother, King John, whereas John de Preaux, who, being the eldest son, inherited their father's lands in Normandy swore for Philip and helped to organise the surrender of Norman castles for the French king, simultaneously giving his son as hostage for Peter's good faith.

The History of William Marshal translated by Nigel Bryant, Woodbridge 2016