Happy Birthday to HM Richard I, the younger brother of HM Henry the Young King, who was born on this day in 1157 as the third son (second surviving) of Eleanor of Aquitaine (1124-1204) and Henry II of England (1133-1189). He was four years younger than his brother William (b. 17 August 1153- d. spring of 1156), two years younger than his brother Henry (b. 28 February 1155), and one year younger than his sister Matilda (b. June 1156). He was the elder brother to Geoffrey (b. 23 September 1158), Eleanor (b. September 1161), Joanna (b. September 1165) and John (b. December 1166). From the day of his arrival he was destined to rule his mother's duchy, Aquitaine. I wonder whether it had ever occured to Richard to say (if only mentally) "Thank you!" to his brother Henry. After all he owed him, no more no less, but the throne of England itself (plus Normandy, Anjou, Maine, etc.) That might have been not possible had the Young King not died suddenly, prematurely and quite conveniently in 1183. For there was only one obstacle on Richard's path to becoming a legend, and it was his elder brother Henry. As Professor Matthew Strickland observed, and I cannot agree more, "had it been Richard who died in 1183, he would have left a reputation as a harsh, even tyrannical ruler, as much as that of a fine warrior" (The Upbrining of Henry the Young King. p.187). The author said this in the context of Henry's death in 1183 and the universal outpour of grief it caused, but I would go even further claiming that without Henry's death Richard would have never become the Lionheart of the legend. He would have gone to the Holy Land and won his name there, that I am quite certain of, but still I will hold on to the notion that it was the royal crown that turned out to be the crucial element of his success and fame (both in his lifetime and posthumously). 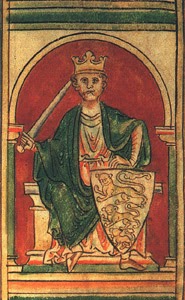 Modern historians have discussed at length differences between the two brothers, Richard and Henry, praising the former's virtues and pointing out the latter's shortcomings. It seems that they have formed their judgement on what can be read in the works of Gerald of Wales, who gave us a glimpse of the two princes. Usually Gerald was at his malicious best when writing about Henry II and his family, never ceasing to nurse a personal grudge against them, but I get the impression that in his evalution of Henry and Richard he came very close to, what can be called, objectivity.

" Different as were the habits and pursuits of the two brothers, sprung from the same stock and the same root, each has merited everlasting glory and endless fame. They were both tall in stature, rather above the middle size, and of commanding aspect. In courage and magnanimity they were nearly equal; but in the character of their virtues there v as a great disparity. One was admirable for gentleness and liberality, the other distinguished himself by his severity and firmness. The one had a commendable suavity, the other gravity. One was commended for his easy temper, the other for his determined spirit. One was remarkable for his clemency, the other for his justice. The vile and undeserving found their refuge in the one, their punishment from the other. One was the shield of bad men, the other the hammer to crush them. The one was bent on martial sports, the other on serious conflicts. The one bestowed his favours on foreigners, the other on his own people; the one on all the world, the other on the worthy only. The one's ambition magnanimously compassed the world; the other coveted, to good purpose, what was rightfully his own.
But why should I dwell on such details? Neither the present age, nor any former times, have seen two princes born of the same king, so noble, and yet so different. Yet the germs of their great and various virtues, and of far greater still, if it were possible, might all be derived, different as they were, in rich abundance, from their illustrious stock. Whatever good qualities you find in either of them, you know v ere transfused from the root into the branches. For who was ever more merciful to the meek, or more cruel to the fierce, than their right noble father?" (On Henry II and His Sons, from The Topography of Ireland, Chapters 49-50)

Unfortunately, modern historians have apparently decided to go a little bit further and misinterpret Gerald's words. The outcome? Let me just say that when compared to Richard, poor Henry does not stand a chance. For what the poor thing could say in the face of this (just random quote from Frank McLynn's Richard and John: Kings at War):

"A hedonist and wastrel, permanently in debt, he was prodigal, improvident, insouciant and foolish; the notion of paying his way was unknown to him. Henry [the father] had tried to train him in court politics and administration, especially after the first coronation in 1170, but the young man proved an unwilling apprentice, lazy, incompetent and empty-headed. as with most charismatic figures, he was given the benefir of the doubt, and sagacious observers, bedazzled by his charm and magnetism, put their intellectual faculties on hold and indulged in a primitive form of a sun worship."

No comment today, but my next post is on the way :-) Thank you Mr. McLynn for the inspiration.


But back to Richard. Taking this opportunity I would like to recommend a few blog posts about him, discussing his eventful life, unnecessary death and posthumous career as a character of many novels. Here they are: