Magna Carta, Birth at Paris and One Cold-Blooded Murder

Wonderful news to share! Henry the Young King Blog has reached 90,000 page views today. Thank you, dear readers! I promise to do my best to keep the posts coming. Now, a few words about June anniversaries.

As we all know this year and this week in particular, Henry the Young King's youngest brother John or rather the document he so reluctantly put his seal to in 1215, takes centre stage. 800 years ago, on 15th June, the king was brought to Runnymede, about 20 miles west of London, to ratify Magna Carta, one of the most important documents in the history of the world. Of course, neither John nor his barons could know what their proceedings taken that day would mean to the development of modern democracy. I had occasion to see the place itself during my trip to England - nothing revealed what momentous event occured there in the dim and distant past. As we can read on the official website of The Magna Carta Trust, the Great Charter of Liberty not only "put limits on the power of the crown for the first time, but laid the foundations for modern freedom", becoming the basis for the U.S. Bill of Rights, the U.S. Declaration of Independence and the Universal Declaration of Human Rights. In the long run - we must agree - the "bad" King John wasn't that bad. There would be no Magna Carta without him and his flaws :-) Visit the Trust's website here to read fascinating articles published to commemorate the anniversary. 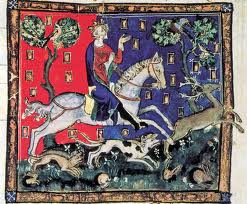 Magna Carta's 800th anniversary certainly is an occasion to celebrate, but let us not forget about other important events. On 19 June 1177, for instance, the only child of Henry the Young King and Marguerite of France was born at Paris, at the court of its grandfather, Louis VII (1120-1180). It should have been an occasion for rejoicing, but instead the young parents were stricken with grief, for, according to the English sources, 'the young queen was delivered of a still-born son' (Howden). The French, however, claimed that the child lived long enough to be baptized and named William, and I assume they were right. After all the child was born in their realm. We can only speculate what course history might have taken had baby William survived. Certainly he would have been his father's pride and joy and future heir.

William was born and passed away 21 years after his paternal uncle and namesake, the eldest child of Henry II and Eleanor of Aquitaine, William (b. 17 August 1153), who died, aged three, in June 1156. The same month William's aunt, Henry II and Eleanor's eldest daughter, Matilda [future Duchess of Saxony and Bavaria], was born at London. These two events and Queen Eleanor's stay in England were illustrated in the Sheriffs of London's accounts at Michaelmas. The following entry can be found there: £40 for the Queen's corrody; £24 for corrody of Henry, the king's son, his sister and his aunt; and £7 for wine; and£6. 6s. for further corrody of the same persons, supplied by hand of Ralph of Hastings (Eyton).

c.1 June 1183. Leading a military campaign against his younger brother Richard, Henry the Young King with his routiers pillaged the shrine of St Amadour at Rocamadour, carrying a rich booty and the holy sword of Roland, Durendal. He did this in order to pay off his mercenaries.

1 June 1191. Death of Philip, count of Flanders, at the siege of Acre. Philip was an important person in Henry the Young King's life. Relative and fellow patron of the tournaments, together with his younger brother Matthew [of Boulogne] they were Henry's chief allies in the Great Revolt of 1173-74.

3 June 1162. Consecration of Henry's tutor, Thomas Becket as the Archbishop of Canterbury. Henry had been placed in Becket's household sometime before or in 1162 only to be removed as a sign of his father's growing displeasure towards his former chancellor in October 1163.

5 June 1170. Prince Henry set off for the coast (probably Barfleur) from Caen to cross to England where he was to be crowned in Becket's absence. He was accompanied by Richard, Archdeacon of Poitiers (who had been sent to Caen to bring the prince) and the bishops of Bayeux and Seez. c.8 June one of Becket's partisans, named Amicus, wrote a letter to Becket, who was at Sens, informing him that the coronation was to take place on “Sunday next” and that the Pope's letters forbidding the coronation never reached the persons they were addressed to.

11 June 1183. Saturday. The feast day of St Barnabas the Apostle. Death of Henry the Young King, aged twenty-eight, at Martel.

14 June 1170. Coronation of Henry at Westminster Abbey by Roger of Pont-l'Eveque, the Archbishop of York. Since then the prince was to be called the Young King in order to distinguish him from his father. A day after Henry's coronation, on 15 June, William I of Scotland and his brother, David [Earl of Huntigdon], did homage to the young king.

18 June 1178. Sunday. Death of Martin, Prior of Vigeois, at Limoges. On the same day Geoffrey of Breuil succeeded to the priorate. Geoffrey's Chronicon Lemovicense was to become the main source describing Henry the Young King's death at Martel in June 1183.

29 June 1173. Philip, count of Flanders attacked Normandy and took the castle and town of Albemarle. Earl William of Albemarle surrendered also his other castles and was taken prisoner (Eyton). The Great Revolt began in earnest.

c. 30 June 1182. The feast day of St Martial. Henry the Young King was at St Martial, Limoges, where he “was received with a procession, and he gave a pallium of silk woven with gold thread” (Itier). He might have attended mass celebrated by Theobald, abbot of Cluny. It was probably then when he met the discontented Poitevan barons, who asked him for help in waging war against their duke, Henry's younger brother, Richard [later Lionheart].

Lastly, let us not forget what sad loss Henry the Young King's great-great-nephew, King Edward II (1307-1327), suffered on 19 June 1312. On that day, his beloved Piers Gaveston - "Perrot" as he was called - was taken to the Blacklow Hill, on the earl of Lancaster's lands, and executed or rather murdered there in cold blood, his body and severed head left on the spot. My friend Anerje runs a blog dedicated to Piers here. Highly recommendable.