In the year 1155 England said farewell to three distinguished men: Geoffrey of Monmouth, the author of what was to become one of the most popular works of the Middle Ages, Historia Regum Britanniae; Henry of Huntingdon, who not only wrote the most extensive work of history of King Stephen's reign (Historia Anglorum), but also a number of formal letters and a collection of miracle stories, both of which he incorporated into his Historia; and Wulfric of Haselbury, the Wiltshire anchorite, but also "social arbitor, prophet and healer” (plus- the fact less known- quite wealthy man). On a more joyful note, 1155 also saw the arrival of a new prince. On 28 February the second son of Henry II of England and Eleanor, Queen of England and Duchess of Aquitaine in her own right, was born in the manor of Bermondsey, London. The boy was named Henry and was to go down in history as "the Young King". Before he was safely delivered into this world, Henry could already boast about sea-crossing in a violent storm and attending, no more no less, but a coronation. We should consider ourselves lucky, for we know Henry's prenatal whereabouts, including exact dates and sites. On 7/8 December 1154 he crossed the Narrow Sea, from Barfleur to England with his mother (quite obvious :-)), father, and two paternal uncles, Geoffrey and William. How did Eleanor, being seven months pregnant, manage to survive the voyage, I dare not guess. The important thing is that eleven days later, on 19 December, she was well enough to be crowned with her husband at Westminster. And their second son was there too, albeit incognito :) 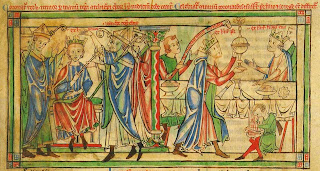 1155, the year of Henry's birth, also saw the births of the two of his future brothers-in-law, William II of Sicily and Alfonso VIII of Castile. Yes, they were all peers, each of them with bright prospects lying ahead. However, the world they entered was far from being safe and peaceful. To the contrary, it was in constant turmoil. Henry's father, freshly crowned king of England, was busy restoring peace in the realm ravaged by the nineteen years of a civil war. William of Sicily's father, also William, found himself and his subjects facing the threat of the Byzantine domination when the forces of Manuel Comnenus invaded the south of Italy and found an ally in Hadrian IV (Nicholas Breakespear), the only Englishman ever to become pope. The latter, too, had his hands full, restoring order in Rome after the unease caused by Arnold of Brescia and his followers,plus crowning Frederick I [Barbarossa] Holy Roman Emperor at St Peter's Basilica in June. Alfonso was to be born nine months after Henry, in November, to King Sancho III of Castile and his consort, Blanche of Navarre, only to be orphaned by the death of his father three years later, meaning his minority was to be marked by unrest and civil war.

Using the occasion, I would like to thank all the lovely people whose unwavering support made our blog what it is today, the realm of Henry the Young King, with its sovereign hopefully not as much forgotten as a few years ago.

Many thanks to two very special ladies, who never cease to inspire our work in the Young King's chancery, Ms Sharon Kay Penman and Ms Elizabeth Chadwick. To Ms Marsha Lambert and Ms Stephanie Churchill for being our Guardian Angels; Ms Kathryn Warner for her encouragement, kind support and fresh approach to writing about history. To Ms Anerje, Ms Joan Battistuzzi, Ms Gabriele C. and Mr Mark Richard Beaulieu for their lovely and thought-provoking comments; to Mr Richard Willis for inviting me and Henry to his blog (and my first offiicial post on Henry), his friendly words of advice and our chats about the Angevins; Ms Emilie Laforge, who has become Henry's godmother; also Ms Kasia Ścierańska, Mr David Parr, Mr Ken John, Mr Ulrik Kristiansen, Ms Maria Grace, Mr Darren Baker, Ms Sonja Koch (our Dear Kleine Dame aus Berlin), Ms Elisabeth Millard, Ms Paula Lofting, Ms Mary Tutor, Ms Jayne Smith, Mr Koby Itzhak, Ms Karin Durette, Mr Valentino Krizanić. Special thanks to Mr Malcolm Craig for being My Friend in the Twelfth-Century History. I hope I have mentioned all the lovely people who have supported us in our efforts to bring the Young King to life. Thank you!

Special thanks to my beloved husband and my children for their love and unwavering support :-)


And since to Henry's elder half-sister Marie of Champagne we owe the character of Sir Lancelot of the Lake, seizing the opportunity I would like to encourage you to read about a very special place which we try to support on our Henry the Young King blog :-)